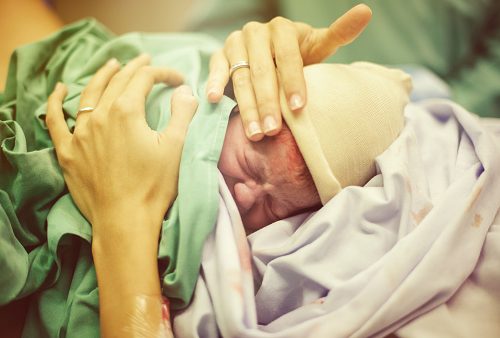 In the United States, about one in three births happen by cesarean section. This is a dramatic increase over the past few decades, jumping from five percent in 1970 to 20 percent as of 1996. This may not be of much concern to many people, but a new study involving mice finds that C-sections cause babies to gain more weight than those delivered naturally.

A C-section is when a baby is delivered through a surgical incision in the mother’s abdomen and uterus. While some C-sections are done due to unforeseen complications, others opt for a planned C-section for the sake of convenience.

It is estimated that about 50 percent of birth in countries such as Brazil, Dominican Republic, and Iran are done by C-section. This is despite that fact that only about 15 percent of births actually require it to avoid risking the life of the mother or child, according to the World Health Organization.

Researchers from the New York City University School of Medicine wanted to investigate the effects that having a C-section would have on a child versus one that was born vaginally. Their focus revolved around the microbiome, bacterial species that live in the human gut.

Human microbiome has evolved over millions of years and play a vital role in our overall immunity to foreign invaders. However, practices such as C-sections and antibiotic treatments have disrupted this delicate ecosystem over the past few decades.

The researchers believe that these practices are related to the increasing rate of obesity we are currently facing in this country and around the world. One theory is that C-sections may be interrupting the transmission of maternal microbes at birth that play an important role in early metabolic and immune systems in a child’s development.


“Our study is the first to demonstrate a causal relationship between C-section and increased body weight in mammals,” says lead study author and microbiologist Maria Dominguez-Bello, Ph.D.

The study in question involved 34 mice who were delivered by C-section. They were compared with 35 mice born vaginally. Body weight and intestinal DNA were followed until adulthood.

Regardless of gender, the mice born by C-section were found to weigh more and had significantly different bacterial species in their guts when compared to mice born naturally. Additionally, bacterial species found in vaginally delivered mice were seen to mature healthily, while C-section pup’s microbiome were seen to mature far too soon initially, but then became relatively immature later in life.

These findings appear to fall in line with previous research done on C-section human babies with decreased gut microbe diversity through their first year of life.

“Further research is needed to determine whether the dominance of certain bacterial groups can protect against obesity. Our results support the hypothesis that acquiring maternal vaginal microbes is needed for normal immune and metabolic development,” said Dominguez-Bello.