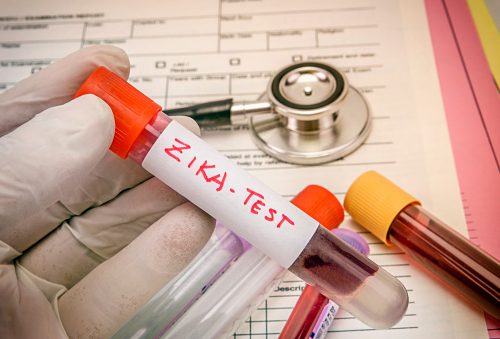 Researchers from the National Institute of Allergy and Infectious Diseases (NIAID) have developed and tested two new vaccines. While these vaccines are still in the experimental stages, their effects are promising. There are not currently any vaccines available commercially to treat Zika virus or prevent it from affecting a fetus in utero when the mother develops it.

This study is the first to use animal trials to show that transmission of the virus can be prevented in fetuses if taken before contraception. The two vaccines used in the experiment transfer the protection from the mother to her fetus, in utero.

There were two separate vaccine candidates used in this study in combination with one another. The first vaccine candidate, which was developed by the University of Texas Medical Branch, is a live-attenuated vaccine. The other vaccine used in this experiment was created by Moderna, a biotechnology company, and it is an mRNA vaccine.

It has been found that the Zika virus does not cause serious malady in children or adults. It can, however, cause major birth defects and can even be fatal for babies when a pregnant mother transmits the virus to her fetus in the womb. Until now, there has not been a vaccine created that could prevent transmission of the virus in utero.

This experiment tested the viability of these two new candidate vaccines to prevent the spread of the virus between a mother and her fetus. The researchers injected 20 non-pregnant female mice with the mRNA vaccine on two occasions, 28 days apart. They also injected 18 female mice with the live-attenuated vaccine, only once. A control group of female mice was injected with placebos at the same time as both experimental vaccines were injected into the subjects.

Both vaccines resulted in the development of high levels of antibodies in their hosts that neutralized the Zika virus. All of the mice, control groups included, were then impregnated and injected with the Zika virus. Those that had received injections of either vaccine “showed markedly diminished levels of Zika virus RNA in maternal, placental and fetal tissues compared to placebo-injected mice, resulting in protection against placental damage and fetal demise.”

The results of the research have found that these two new vaccines can both prevent the transfer of the Zika virus from the female mouse to her fetus. They also prevent the fetus from suffering virus-induced damage to the placenta and from dying as a result of contracting the virus from its mother. Abundant research is still required to determine whether either of these vaccines can prevent congenital Zika virus in humans.

Why is Brazil affected by Zika virus?