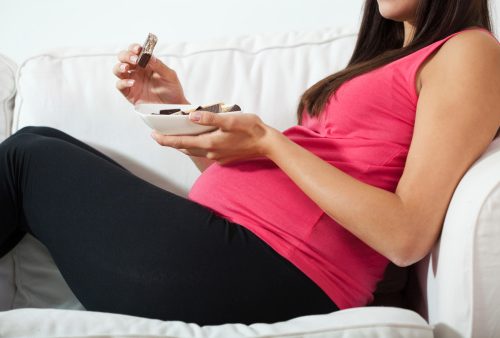 The study aimed to uncover the benefits of high-flavanol chocolate during pregnancy and how it can reduce the risk of preeclampsia. The researchers conducted a single-center randomized and controlled trial of 129 women with singleton pregnancy during 11 to 14 weeks’ gestation. The women were divided into either high-flavanol or low-flavanol chocolate groups. Thirty grams of chocolate were consumed daily over the course of 12 weeks and the women were followed until delivery. Each woman had double-notching on uterine artery Doppler and pulsatility index was taken at baseline and again at 12 weeks. Preeclampsia, gestational hypertension, birth weight, and placental weight were also examined.

Researcher Emmanuel Bujold said, “This study indicates that chocolate could have a positive impact on placenta and fetal growth and development, and that chocolate’s effects are not solely and directly due to flavanol content.”


Benefits of chocolate during pregnancy

Pregnant women rejoice! It seems that chocolate—of the dark variety at the very least—is not a vice you’ll need to give up during pregnancy. In fact, studies have found a multitude of benefits tied to enjoying dark chocolate in moderation while pregnant. It can help prevent preeclampsia, which can cause premature births due to higher blood pressure causing clotting and potential liver and kidney damage.

Dark chocolate has also been found to help regulate blood pressure and relieve stress in expectant mothers which can translate into happier babies. A study from Finland found that mothers who enjoyed chocolate while pregnant were more likely to give birth to happier babies that adapted to new situations well.

Dark chocolate is also full of antioxidants and important vitamins and minerals that can aid in preserving the health of mother and baby alike. In fact, it can help an expectant mother manage their weight and cholesterol levels and reduce their risk of developing heart disease.

Choosing the best chocolate during pregnancy

While there are many potential benefits to enjoying chocolate during your pregnancy, choosing the right kind is important to ensuring you reap these benefits while staying healthy. Try choosing a darker chocolate with a higher percentage of cocoa, as this is the variety that contains the most health-enhancing compounds. If you can, seek out organic chocolate that contains a minimal amount of sugar, and avoid chocolate mousses as they are made using raw eggs and may cause harm to you and your baby.

How long does menopause last?