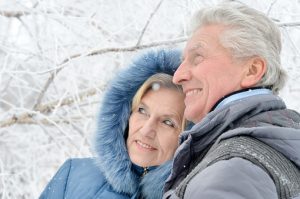 There are different causes of hearing loss including genetic causes, enduring loud noises over a period of time, damage to the ear, and of course, aging. But did you ever think that the colder weather you experience in the winter could impact your hearing? Well, according to research findings, it can.

When the temperature drops, the risk of ringing in the ears and hearing loss increases. This is because there is a higher risk of rogue bones growing in the ear canal along with hardening of ear wax.

Bone growth in the ear canal is known as surfer’s ear because this condition is fairly common among those who surf, as they spend a lot of time in colder water. This condition forms on the top of existing bone in the ears and travels down the canal to the ear drum. The condition can potentially lead to hearing loss and also results in constant pain and ringing in the ears.

Dr. Roger Henderson explained, “In severe cases, cold weather can cause abnormal bone growths within the ear canal, known as ‘exostosis.’ This is the body’s way of attempting to protect the ears by creating a barrier against the cold. Exostosis can constrict the ear canal, contributing to increased ear wax build-up as the ear can no longer expel earwax effectively. This can be heightened in cold weather as wax can harden when ears are exposed to low temperatures, making ears more likely to become blocked.”

Along with contributing to surfer’s ear, colder weather hardens earwax, which can result in a blockage. In some cases, the hardened wax can trigger pain along with reducing hearing.

Individuals who use hearing aids are at a much higher risk for hardening earwax because having a “foreign object” in the ear causes it to produce more wax. When wax builds up in the ear, it can lead to infections, earaches, headaches, and ringing in the ears (tinnitus).

Although many of us would simply stick a cotton swab in the ear to remove wax, this is highly dangerous. You can actually push the wax further in, causing more of a blockage. If wax is your problem. there are much safer ways to remove it.

The guidelines for ear care were published in Otolaryngology — Head and Neck Surgery outlining the dangers of excessive earwax removal. Here’s what the new guidelines entail:

The real cause of hearing loss uncovered