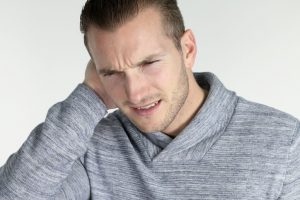 Tinnitus is a hearing condition in which a patient hears constant ringing, buzzing, or humming even when no sound is present. For some, tinnitus may only be noticeable at night or in quiet environments, as the ringing isn’t as noticeable when the noise is present. Because of this constant ringing, tinnitus can impede on getting eight hours of a solid uninterrupted sleep due to tossing and turning.

Tinnitus may also make it difficult for a person to pay attention to others or concentrate on one thing, so it definitely has a negative impact on one’s overall quality of life.

There are many causes of tinnitus, and being aware of your specific cause can help you better treat the condition. For starters, tinnitus can be due to aging, damage of the inner ear, a buildup of wax, a middle ear infection, Meniere’s disease, or otosclerosis, which is an inherited condition characterized by an abnormal bone growth in the middle ear.

Tinnitus may also be a result of a head, neck, or brain injury, too. Over one in 10 tinnitus cases result from a head or neck injury. To make matters worse, injury-related tinnitus is often more severe and unpleasant.

The study was conducted by the Oregon Health and Service University Tinnitus Clinic, involving 2,400 patients who suffered from chronic tinnitus. The participants were asked about the cause of their condition, and slightly over 12 percent of patients reported tinnitus after a head or neck injury. One-third experienced neck injuries alone, and the remaining experienced both head and neck injuries.

Those who suffered head and neck injuries leading to tinnitus also experienced greater health complications in their day-to-day life, including poor sleep, difficulty thinking, inability to relax, and memory problems. Tinnitus noise level was estimated to be louder as well. These patients often sought help for their condition much sooner than regular tinnitus patients, which can be explained by the greater severity of the condition when it’s caused by a neck or head injury.

Additionally, tinnitus may also result from temporomandibular joint (TMJ) disorder (lock jaw). Previous studies have found a strong association between TMJ disorder and tinnitus. Patients with TMJ problems are more likely to experience tinnitus, similar to individuals with a head or neck injury.

There are three main theories why TMJ disorders may result in tinnitus. The first one is based on the fact that the chewing muscles are situated closely to the inner ear muscles. The second theory implies there may be a direct connection between the ligaments attaching to the jaw and one of the hearing bones in the middle ear. Lastly, the nerve supply from the TMJ has connections with brain regions that are involved in hearing and sound processing.

The good news is, if your tinnitus is a result of the TMJ disorders, then addressing the issue may also improve your tinnitus.


Signs and symptoms of tinnitus

You should see a doctor for tinnitus the moment you notice it or get irritated by it. Furthermore, if tinnitus is a result of an injury or other serious condition, you should see your doctor right away, too.

Tinnitus treatment by retraining the brain may work to alleviate ringing symptoms: Study