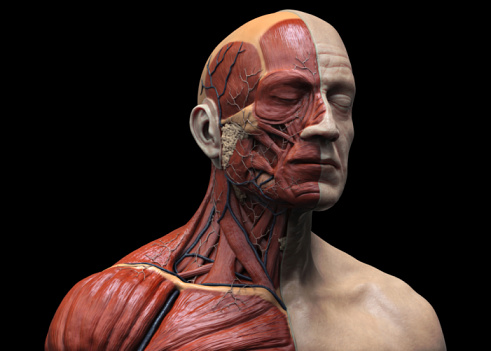 Sternocleidomastoid pain is felt in one of the largest muscle groups in the neck. The sternocleidomastoid name itself is very descriptive, as it originates at the manubrium of the sternum (sterno-) and the clavicle (cleido-) and inserts at the mastoid process of the temporal bone of the skull (mastoid). The muscle can be seen when moving the neck from side to side.

Anatomy and function of the sternocleidomastoid muscle

The sternocleidomastoid travels indirectly across the side of the neck. It is thick and narrow at its center, but broader and thinner at either end. The sternocleidomastoid is a two-headed neck muscle that is separated by a triangular interval called the supraclavicular fossa. The two heads then gradually blend below the middle of the number into a thick rounded muscle before inserting into the mastoid process.

The sternocleidomastoid muscle flexes the cervical vertebral column with unilateral contraction, allowing the head to rotate to the opposite side. Bilateral contraction can elevate the head dorsally, extending the upper cervical joints. The sternocleidomastoid also helps to elevate the sternum and clavicle by expanding the thoracic cavity for the processes of breathing.

What are the causes of sternocleidomastoid pain?

A common reason for sternocleidomastoid pain, as it can cause us to use the muscle for extended periods of time. Having your neck in a constant upward position, as seen in high-rise construction workers, ceiling painters, or even swimmers who have to constantly look ahead of them, can lead to the development of sternocleidomastoid pain

Excessive strain is caused by poor posture stances like when reading in bed, sleeping with more than one or two pillows, or even long periods of having your head turned to one side. Over time, this can cause the developed of sternocleidomastoid pain.

Described as a sudden jerk or pull of the head backward and then forwards, which commonly occurs during a motor vehicle accident or when struck in the head during a boxing match. This forced movement not only causes strain to the neck bones but also the sternocleidomastoid muscle leading to pain.

Breathing either very rapidly or very slowly can cause strain on the sternocleidomastoid muscle.

Infectious conditions such as sinusitis or the flu can lead to referred pain in the sternocleidomastoid.

Trigger points in the sternocleidomastoid don’t cause pain in the muscle themselves, but can be tender and a source of painless neck stiffness, causing those affected to keep their heads tilted to one side. Trigger points found on either head of the sternocleidomastoid will instead lead to referred pain, which is pain felt in a part of the body other than its actual source.

Sternal head trigger points can cause deep eye pain, tongue pain when swallowing, and headaches over the eye, behind the ear, and in the top of the head. Pain in some cases may spillover on the side of the face, mimicking trigeminal neuralgia, a condition characterized by the irritation of the trigeminal nerve.

Trigger points in the clavicular head can cause a deep earache or a toothache. Additionally, frontal headaches may also be caused.

If your experience pain, numbness, or tingling that radiates down one or both sides of the arms, or you are experiencing weakness in your arms or shoulders, seeing a doctor right away is recommended. Additionally, having difficulty moving your head or not being able to move your head at all should lead to a prompt visit to your local doctor’s office. The following are potential sternocleidomastoid muscle pain symptoms that depend on the extent of the injury.

Treatment and prevention of sternocleidomastoid pain

Perhaps the best form of treatment, massage can be done yourself or by an experienced massage therapist. By using your thumb and forefingers, squeeze the muscles of the sternocleidomastoid gently to help them stretch and relax.

The trapezium muscle is found on the back and is responsible for moving, rotating, and stabilizing the scapula. To achieve this, start in a seated position and tilt the head towards your left side. Now bend your body slightly to the left. It is important to place the right hand under the right hip for balance. Then move your head forward while staying in this tilted position as you progressively turn your face to the left.

This can be achieved by performing exercises that push the head forward. The application of force on one side of the jaw with your hand while you push against it can be a great option.

Can be found at your local pharmacy without a prescription. They work by being rubbed into the area of pain to provide pain relief.

Over the counter pain medications such as NSAIDs (ex. Advil or ibuprofen) can help alleviate sternocleidomastoid pain.

Important for decreasing the load put on the sternocleidomastoid muscles. It is therefore recommended to be aware of the way you sit and stand.

Prevent excess pressure on the shoulder

This can be caused by reading while lying down in bed or holding a cell phone for extended periods. Swimming may also put undue pressure on the shoulders. It is recommended to take a break from these actions when the symptoms of pain present themselves,

It is not recommended to sleep with multiple pillows under the shoulder as it can cause strain on the sternocleidomastoid.

This exercise combats postural deficiencies known as forwarding head posture, commonly seen when a person has a protruding chin by extending their neck.

Side neck and rotation stretch

Helps to lengthen the sternocleidomastoid muscle by stretching it.

A strengthening exercise using lateral flexion or sideways bending while using your body weight as resistance.

Using a half rotation stretch of the neck only in the front help target the sternocleidomastoid muscles.

What are symptoms of intercostal muscle strain? Causes, tips, and guidance