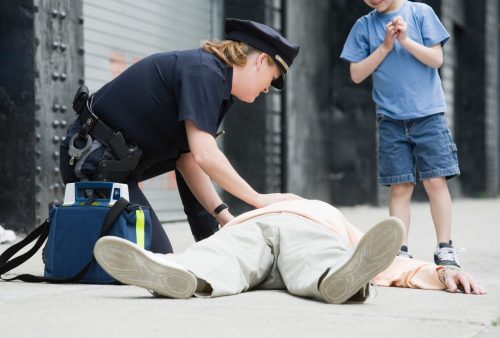 Simple partial seizures, also known as focal onset aware seizures (or “focal seizures” for short), begin in one area of the brain and the person remains alert and able to function. These seizures are brief, lasting only seconds to minutes, and are generally experienced by people with epilepsy. There are many types of treatment options available for these types of seizures including medications, dietary therapy, devices, and surgery.

What are the types of simple partial seizures?

Simple partial seizures take on different forms depending on the person. They are classified according to their symptoms, which include the following:

Accompanied by autonomic symptoms or signs including abdominal discomfort, nausea, stomach pain, rumbling sounds of gas moving in the intestines, belching, flatulence, and vomiting. Because of these symptoms, autonomic seizures have also been referred to as abdominal epilepsy. Other symptoms may include flushing, sweating, hair standing on end, pupil dilation, changes in heart rate and respiration, and urination. A select few people may also experience sexual arousal, erections, and orgasms.

Simple partial seizures that arise in or near the temporal lobes can take the form of an odd experience. For example, people experiencing these kinds of seizures may see or hear things that are not there. They may also feel emotions such as fear, sadness, anger, or joy. They may smell something foul, get a bad taste in their mouth, have a strange feeling in the pit of their stomach, or have a choking sensation.

This person may see lights, hear buzzing, or feel tingling or numbness in certain parts of their body. These seizures can also be referred to as Jacksonian sensory seizures.

What are the causes and risk factors of simple partial seizures?

The causes and triggers of simple partial seizures include stress, which is the most common. The causes differ from person to person, and many are unsure of what triggers the reaction in themselves. Documenting what happened right before the seizure is a good way to find out what your triggers are. Document what you were doing, what was happening around you, and what you felt before the seizure began. Some other triggers include the following:

The real cause of seizures is often unknown, but it is important to note that certain diseases involving blood vessels of the brain can raise the risk of focal seizures in patients over the age of 65.

Also read: What are the symptoms of partial (focal onset) seizures? Types, causes, and treatment

Some common symptoms of simple partial seizures include the following:

The most effective way to diagnose epileptic seizures is an electroencephalogram (EEG). This test records electrical activity in the brain and can record unusual spikes or waves in these patterns. Different types of epilepsy can be identified by examining these patterns. Other scans such as magnetic resonance imaging (MRI) and computed tomography (CT) can be used to look at the cause and location of the brain. These scans show scar tissue, structural problems, or tumors in the brain as well.

Treating simple partial seizures depends on the type of seizure, how often they occur, their severity, the patient’s age, their overall health, and their medical history. Anti-seizure medications can be very helpful, but it may take a few tries to get the right dose and medication. Doctors will monitor patients and watch for side effects until the best treatment is found. Surgery may be another option if medication cannot control the seizures. Lifestyle changes can also be helpful:

Simple partial seizures are short, small, and may be undetectable, even by those close to you. However, they may be caused by epilepsy which is a warning sign that a more intense seizure is on its way. With the help of your doctor, this disease can be treated and managed if you develop and follow a treatment plan that works for you.