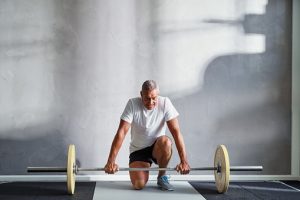 Exercise is an important part of maintaining overall health, but if you partake in too much exercise, you could be hurting your libido. A study published in Medicine and Science in Sports and Exercise found that high amounts of intense exercise – such as the type of training someone would perform to train for a marathon – may lower libido in men.

Data was collected from 1,077 respondents and responses were split into groups based on libido – either low or normal/high. The men who fell in the low libido category consistently stated that they lacked desire and sexual frequency was also low, even if they were in a relationship.

The researchers were unable to determine the exact number of hours to cause a dip in libido but they noted that intense, long-term training was associated with lower libido.


The researchers suspect that too much exercise actually reduces testosterone production, which reduces libido. Study author Anthony C. Hackney explained, “During periods of a lot of energy expenditure, your body views that as a short-term starvation scenario, so it tries to conserve calories. And conceiving a child takes a lot of energy, so it’s saying let’s stop producing as much testosterone since it’s not a good time to conceive.”

Women may have more obvious signs that they are over-exercising as they may experience absent periods, but men don’t have these tell-tale signs. There are some signs, though, that men can look out for that would reveal low testosterone. These signs include chronic fatigue, soreness that lasts longer than two weeks, and lack of motivation.

If you believe that intense exercise is hindering your libido, then your first course of action is to pull back on intensity and give yourself a few more rest days to see how you feel.

The only way to determine exactly how a man’s testosterone levels are are with a blood test. But some of the symptoms a man will feel, which we listed above, could offer some insight on if your exercise regime is playing a role in your testosterone levels. Remember, like with anything else in life, moderation is key.

Simple tips to reignite your libido

5 sure-fire ways to boost your libido