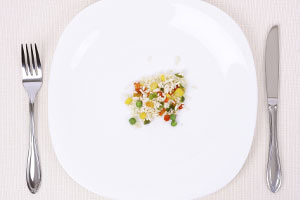 You see it all the time in the tabloids: Photos of almost skeletal models and celebrities, their bones jutting out of hip sockets and rib cages exposed in bikinis.

It’s not pretty, and I’m not just saying that as a 40-something woman who is fighting the clock, trying to be beautiful and desirable and all the rest of it. The push to be super-skinny is ruining their health.

There’s a problem in our youth-obsessed culture that goes well beyond physical appearances.

Anorexia, bulimia, binge-eating – these eating disorders are more than addictions. They are diseases, preying upon our bodily systems, our organs and tissues. Wasting away our good health.

Eating disorders are more prevalent than ever among young girls desperately trying to fit the beauty mold. A full 25 percent of college-aged women in America engage in bingeing and purging as a weight-management technique, according to the National Association of Anorexia Nervosa and Associated Disorders (ANAD). What does that tell you?

But you may not realize that a huge part of the American population is at risk for eating disorders – a segment that gets overlooked entirely because of misconceptions. I’m not talking about kids in elementary school flipping through teen magazine and starving themselves to look like supermodels.

I’m talking about seniors. Eating disorders are not just for teens and young adults. They can destroy the lives of older adults who are far more susceptible to them for many unsettling reasons.

But why? Isn’t anorexia, and binging and purging, about starving yourself to be model-perfect to measure up to some unrealistic ideal? Aren’t seniors well beyond all that?

If you’ve ever known someone with an eating disorder, you might know just how heart-wrenching their behaviors are. They are rooted in the need for control. As things in life take a nosedive, people can grasp for control of what they put (and don’t put) into their mouths, and how long it stays in their stomachs.

You can trace them back to food and weight, but there’s a number of factors that often come into play to cause these diseases: Feelings of low self-esteems, depression, anxiety, loneliness, introversion and a history of abuse.

Controlling your food consumption is a way to cope

Food, just like addictive drugs, can offer a way to cope with painful emotions and experiences that can otherwise feel overwhelming. Food is a coping mechanism that gives people a sense of control.

But it can severely damage your physical and emotional health. Anorexia can be lethal, leading to severe anemia, kidney problems, bone loss and heart problems such as arrhythmias or heart failure.

The thing is, people don’t magically grow out of eating disorders when they leave adolescence. The research and literature on eating disorders tends to focus on people under 30 and women in particular. But many people with these diseases live with them from adolescence into late adulthood.

The Renfrew Center Foundation for Eating Disorders, a pioneer in the treatment of these diseases since 1985, reports that up to 24 million people of all ages and genders suffer from an eating disorder in the U.S. That number shows no signs of decline, either. And the American Journal of Psychiatry has said that eating disorders have the highest mortality rate of any mental illness.

Seniors missing out on critical diagnosis

The perception that seniors don’t have eating disorders also means that health care professionals overlook what could be a critical, life-saving diagnosis. Family members, friends and caregivers attribute weight loss, malnutrition or symptoms like diarrhea or vomiting to some other medical condition or “normal” aging process, rather than the mental health disorder it actually is. It’s complicated.

There have been reports of laxative abuse in care facilities, where people with eating disorders were given laxatives “like candy” and used them to purge. There have also been cases of anorexia brought on by the notion that calorie restriction will extend your lifespan.

Eating disorders take a toll on our bodies, no question, but younger people are more resilient. In older people, body systems are that much more vulnerable, so diseases like anorexia and bulimia can do even more damage – eroding them much faster. When seniors are more likely than teens to have heart problems, gastrointestinal problems, and compromised bone density, all these issues can go from bad to worse.

Sadly, older people may just accept these eating disorders as just another symptom of getting older. They’re at their own “end of days” and don’t have the motivation to ask for help. They waste away, accepting their fate and anticipating their death.

Seniors, too, can be even more prone to these diseases than adolescents, because they’re often triggered by stressful life events and needing a way to take control at a time. At this point in life, stressful events are more common: Death of a spouse or loved one, retirement, increasing loss of independence. Coping with these challenges isn’t easy stuff – for anyone, let alone people who may feel marginalized and invisible.

These are roadblocks you might not even be aware of. We’re a society that revolves around youth, money and power. And our focus has little to do with the frail and elderly, and how we can provide for them.

So there’s a message that needs to be heard. Eating disorders aren’t just for adolescents. They wreak havoc on younger people, but they can be even more deadly in seniors. Raising awareness is the first step to helping people look for treatment and improved rates of diagnosis.

So don’t overlook the signs and symptoms, and reach out if you think someone you care about may be at risk.

Not hungry or eating enough? Bring back your appetite

Consider this: You sit down to a hot dinner of roast chicken and potatoes that look perfectly cooked and nicely crisped. But you know you’re going to have trouble chewing and getting down. Learn more about this common challenge for seniors and what’s to be done.

Not eating these foods could put you at risk for disease

Lack of vitamin A from your diet could land you with diabetes and other ailments. Here’s how eating the right foods can keep you healthy. Read about them here.