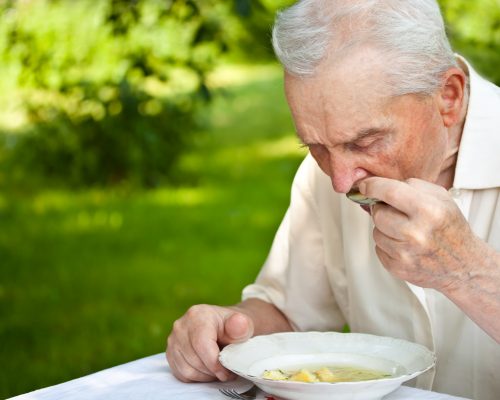 Consider this: You sit down to a hot dinner of roast chicken and potatoes that look perfectly cooked and nicely crisped, and you realize you’re hungry! You dig in with enthusiasm, but the taste and texture you’re expecting is…kind of like eating mush.

That appealing chicken leg is a boneless paste that melts in your mouth, tasting faintly of poultry. It’s a far cry from gourmet dining.

This is the very latest “instant meal” that could be coming to seniors’ residences and long-term care facilities, hospitals and even restaurants much sooner than later. In fact, the elderly in seniors’ homes in Germany are getting a taste of it right now.

Remember the food synthesizer on board the Starship Enterprise? Captain Kirk would swagger up to it when he needed a bite and say: “Computer, a chicken sandwich and coffee. Make the coffee extra hot, please.” And, poof, there it was! That was one smart computer.

We are catching up fast to our sci-fi TV shows, like it or not.

So how does this futuristic technology work?

It has to do with an amazing technology called 3D printing where highly-specialized printers can make objects like jewellery, camera lenses, prosthetic hands, working guns and even cars.

Raw material plastics are put into the printer cartridges, heated and melted into goo. The goo comes out the printer nozzles, layer by layer, to build whatever it is scientists and software engineers have programmed it to build. Yes, that includes food!

We’re already using the process to ice cakes, and make chocolate and pizza sauce. Hershey’s is developing a 3D chocolate printer as a new delivery system for its products. Barilla pasta has launched a contest for designers to create a 3D pasta shape (its next big product for the masses), while NASA is trying to get a 3D pizza printer for the International Space Station.

For your next kitchen gadget, there’s a company out of Spain that is ready to launch a Foodini 3D food printer for home cooks for about $1,300.

Don’t worry, though, you won’t be eating plastic. The technology uses real food to turn it into shapes like waffles, sausages, cookies, you name it! And the food quality is reputed to be as nutritionally sound as the real thing.

But doesn’t this take us further down the road of processed food and eating the toxic sludge of pre-fab ingredients, additives and preservatives? I wonder…

In Germany, 3D food has really taken off in several projects funded by the European Union (EU). One company is making “Smoothfood” specifically for the elderly and others with eating difficulties.

RELATED READING: These common foods are killing your sense of smell

Eating and chewing problems are a very real concern. The EU says one in five people over the age of 50 has dysphasia, a condition where the larynx doesn’t close properly when swallowing, causing food to be redirected to the lungs instead of the stomach. That’s why so many nursing home residents are eating liquefied food and why 3D printing could improve their quality of life. Smoothfood is now served at 1,000 seniors’ homes in Germany, with positive feedback.


What on earth are you eating anyway?

Fresh food—vegetables, meat and starches like potatoes—are pulverized, mixed with a “solidifying agent” and reconstructed into shapes that give it the appearance of a conventional meal. This is done off-site at a production facility and delivered to the care homes on plastic plates.

The idea is since the food looks more appealing than a bowl of puree, residents will be able to enjoy eating and look forward to the socializing that comes with sitting down with others and sharing a meal. The flavor is not quite the same or as potent, manufacturers say, but it’s still on the way to being appetizing.

There are also plans to add further nutrients to the food to make it more nutritious and address specific nutrient deficiencies for individuals.

It all sounds so rosy, doesn’t it? Malnutrition among the elderly is an issue, whether it comes from not being able to eat solid foods, or a loss of interest in eating period. We’ve all got to eat, and I’m all for making the experience better and easier, especially for people who are vulnerable.

Take a closer look at the food of the future

But there are a few holes in 3D food. For one, the producers of Smoothfood won’t reveal what their “solidifying agent” that’s added to the food consists of. So do we trust that it’s safe, all-natural, and good for us?

Technology is busting ahead and there’s always a lag before regulators come down hard.

How does the 3D printing affect the nutritional structure of the real food that’s put into the cartridges? Are there any long-term health effects or consequences?

We’re testing this out on our elderly like guinea pigs who likely won’t be around 30 years from now to see how it all turned out.

Despite all the positives, how safe is food out of a printer?

When I think about my own aging parents being fed something disguised as the real thing, whether they know it or not, would I want that for them?

No, I’d want real, whole foods, prepared as much from scratch as possible.