Home » Weight Management » Diets » These common foods are killing your sense of smell? 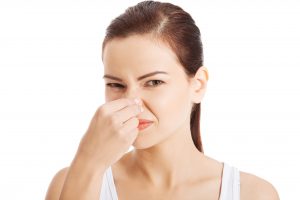 Could filling yourself with high-fat foods lead you to lose your sense of smell?

Well, neuroscientists seem to think so. They are finding out how exactly your diet impacts your nose!

One more reason to eat healthy.

In a study by Florida State University (FSU), funded by the National Institutes of Health (NIH) and published in the Journal of Neuroscience in July, researchers demonstrated that a high-fat diet is associated with significant structural and functional changes in your olfactory system. This is the system in your body that gives you your sense of smell.

The study marks the first time that scientists showed a solid link between poor diet and loss of smell.

When fatty foods sabotage the senses

The research, conducted over a six-month period, involved mice that were given high-fat foods every day. During this time, they were taught to make the association between a particular smell and a reward, such as water.

Those that had high-fat diets were noticeably slower to notice the reward association. Whenever researchers introduced a new odor to record their adjustment, the mice with high-fat diets could not adapt quickly enough — because their sense of smell was significantly diminished.

Researchers say the results are amazing. “When high-fat-reared mice were placed on a diet of control chow during which they returned to normal body weight and blood chemistry, mice still had reduced olfactory capacities,” Prof. Debra Ann Fadool, who led FSU’s research, told Medical News Today.

“Mice exposed to high-fat diets only had 50 percent of the neurons that could operate to encode odor signals.”

The results of the study are coming at a good time. Generally, your sense of smell is used to instruct food choice. But if its effectiveness is adversely impacted by high-fat foods, it could sustain so-called “poor ingestive behaviors.”

Meanwhile, global obesity rates are at all-time highs. According to the NIH, two in every three adults in the United States are considered to be overweight or obese. What’s even more shocking is that about a third of children and adolescents between the ages of six and 19 are considered to be overweight, too. These are numbers that are simply too high, especially for a younger demographic.

Scientists plan to look at whether a high-sugar diet can have the same negative results on smell as a high-fat diet. We’re certainly eating far more sugar than we should be in North America.

I’d suggest taking a break from fattening foods like snack cakes and pies is a good idea. Instead, try foods with monosaturated fats, which will not only protect your sense of smell but improve your blood cholesterol level.

RELATED READING: What you need to eat now to reduce your risk of stroke

Monosaturated fats can be found in things like olive, canola and peanut oils; eggs; avocados and most nuts, such as almonds, pistachios, cashews, pecans and hazelnuts. Fatty fish, like salmon and herring, for example, also are high in these good fats.

Protect your sense of smell – you’ve only got the one nose, after all.