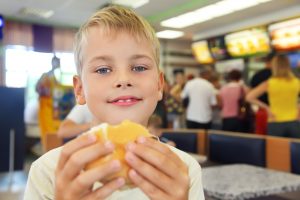 When it comes to packing my son, Quinton’s, lunch box, I’m an all-star. No ready-made Lunchables. I’ve got three types of raw vegetables, often with dip on the side, a sandwich with nitrate-free ham and lettuce, or nut butter (no peanuts, of course), organic applesauce, sunflower seeds. Gold star!

He’s just turned five and is a relatively good eater when it comes to his lunch. Breakfast is also a sure thing with fruit and granola or homemade oatmeal. I sneak in some baby spinach to his fruit and yogurt smoothie for a snack.  Smart, no?

Any dinner dish, however, with vegetables mixed in with protein is a different story. Every mouthful is considered torture, if his protest tactics are any indication.

But drive by any golden arches or sign with a smiling pig-tailed redhead, he’s yelling to stop and ready to eat – burger, fries, nuggets, milkshake, hash browns – you name it.

Why, oh why, does my son love fast food?

I’m a health-conscious mom. I research and write about food, nutrition and health trends. I should know a thing or two about how to instill good habits in my kid. But here I am, shaking my head no when he wants to go through the drive-thru…and then, some days, giving in. What could it hurt, once in a great, great while?

Well, it’s all about establishing those habits. A fast, feel-good meal in a brightly-lit restaurant, surrounded by people and other families chowing down with contented abandon – it’s a happy picture that our children carry into their adolescence and adulthood. Marketers hook kids early.

I remember taking my son to a certain restaurant with tube slides and happy meals. He had just turned two that July and it was raining, so I thought the indoor play place was the answer (without committing to buy any food, except for a juice and a latte). We walk in the door and the first thing he sees, strategically at his eye level, were the row of plastic toys behind glass. He goes straight for them. And then it’s the soft-serve ice cream sundae that someone has in her hand walking by. I can’t win, really. I say no and buy him a juice and he starts crying. And crying.

Clearly, the tube slides won’t be enough. And so I buy him a toy, a kid burger and promise him ice cream for later at home.

I try not to guilt myself too much. I let him enjoy the food and get him to have more vegetables and fruit later in the day.

The problem is, for many people, fast food or drive-thru cuisine has become the norm. That’s what many of us eat on a regular basis, sometimes more than once a day.

But why do we eat so much fast food when we all know (for the most part) it’s not that good for us?
Because it’s there. People, by nature, like to take shortcuts and make things easy on themselves. Healthy eating is bypassed for hot, fast and convenient fast food.

Darker still is the truth behind all the cheery packaging and the smile-on-demand well-trained staff… If fast food was poisoning our bodies ever so slowly, would it be available at every major intersection?

I recently watched the documentary Super Size Me for the third time. It’s a fascinating commentary on fast food! The filmmaker ate only McDonald’s for his three square meals a day for 30 days in 2003. He gained almost 25 pounds, his cholesterol rose to 230 and he experienced a fat accumulation in his liver. The build-up of fat in the liver can lead to serious liver disease and an increased risk of developing cardiovascular problems such as heart attacks and stroke.

The film pointed to the ill health effects brought on by constant fast food dining. The absence of quality nutrients leads to depression, chronic fatigue, obesity, type 2 diabetes…and the list goes on.

On the other side of the equation, John Cisna, a high school biology teacher from Iowa documented his body changes over three months at the beginning of this year where he ate nothing but McDonald’s. He lost 37 pounds and saw his cholesterol drop from 249 to 170, a local news station, KCCI reported. His point was to show how we can eat anything as long as we stick to a limit of 2,000 calories per day and stay close to the recommended dietary allowances for nutrients. Of note, he didn’t exercise or watch his calorie intake before the experiment and also began walking for 45 minutes a day.

His typical “McDiet” consisted of two egg white delights, a bowl of maple oatmeal and one percent milk for breakfast, a salad for lunch and a value meal for dinner – not the super size portions.

All the big chains have introduced “healthier” menu options for healthy eating, along with nutrition facts labels. The low food value is masked by the company’s openness to customers about what you’re actually consuming. If they’re so forthright about the ingredients, the common thought is the ingredients must be OK for us, after all.

Studies show that fast food makes us fat, given the ingredients and portion sizes, and the sky-high sodium content is bad for your blood pressure and your heart. One of the more comprehensive studies from 2012 found that frequent fast food meals take a toll on the immune system, leaving you more prone to sickness, and putting kids at an increased risk of asthma and allergies.

“The scientists accounted for other potential factors that could explain the difference in incidence of the disorders, but fast food remained the only food that showed similar associations among both the younger children and the teens, suggesting a strong link between the fatty and processed foods and respiratory problems.”

Healthier food choices had the opposite effect, they discovered. Three or more servings of fruit were linked to an 11 percent decrease in severe symptoms in adolescents and a 14 percent drop in severity of suffering in children.

Well, I certainly don’t want Quinton to develop asthma or allergies, or jeopardize his immune system. I want him to grow healthy, strong and happy – without the need for a happy meal.

I’m going to find other ways to make good eating memories, like picnics with homemade baked chicken, assorted sandwiches cut in neat fours, and watermelon (from my childhood days), and get him in the kitchen helping me make pizza and chocolate pudding with a fantastic combination of avocado, yogurt and cocoa.