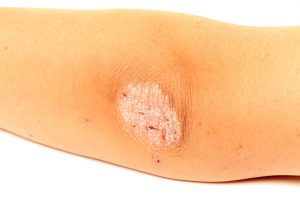 Psoriasis patients requiring biologic treatments face economic and racial barriers. The study coming from the researchers at Perelman School of Medicine at the University of Pennsylvania found that black patients receiving Medicare are less likely to use biologics to treat psoriasis, compared to white patients. Furthermore, patients on Medicare Extra Help are also less likely to receive biologics, compared to those on Medicare with full low-income subsidy benefit.

Psoriasis is a chronic inflammatory disorder, and biologic therapies – those deriving from animal and human cells and tissues – had been shown to be effective in treating moderate to severe psoriasis. Despite its availability, there are many patients who are inadequately treated and unsatisfied with their treatment.

Lead author Dr. Junko Takeshita said, “Previous studies have shown that psoriasis is associated with major physical and psychosocial health burdens that increase proportionally with more severe disease. Although the biologics are generally regarded as being highly effective treatments for patients with moderate or severe psoriasis, our results suggest that out-of-pocket costs and race may impact who receives these treatments.”

Seventy-one percent of the patients identified were considered to have mild psoriasis and 27 percent were considered to have moderate to severe psoriasis. Only 10 percent of patients received biologics as a form of treatment. Medicare beneficiaries without low-income subsidy were 70 percent less likely to receive biologics, and the findings were similar even in rheumatoid arthritis patients.

Senior author Dr. Jalpa A. Doshi added, “Our study is the first to identify such potential barriers among Medicare patients with psoriasis. Future studies are needed to determine if these barriers exist among psoriasis patients with Medicaid or private insurance. Additionally, further study should focus specifically on identifying the causes of such barriers, whether they are patient-centric variables such as treatment preferences and varying levels of understanding the disease, or physician factors including the frequency with which certain treatments are being offered.”

Psoriasis is a chronic inflammatory disease that affects the joints and skin. An estimated 7.5 million Americans live with psoriasis, mainly adults. Nearly 40 percent of psoriasis patients experience joint inflammation with symptoms similar to that of arthritis. Plaque psoriasis is the most common form of psoriasis affecting 80 to 90 percent of patients. In this form, the patient experiences raised reddish skin covered with silvery-white scale. Other forms of psoriasis include inverse, erythrodermic, pustular, guttate, and nail disease. In 2013, the total estimated cost of treating psoriasis was between $51.7 and $63.2 billion.

Treatment for psoriasis is possible, but there is no cure. It is also important to treat any other comorbid conditions in order to reduce the risk of complications.

Psoriasis risk increases with high blood pressure and anti-hypertension drugs. Psoriasis is an immune-related disease affecting nearly three percent of the American population. The researchers found that in women, specifically, long-term hypertension along with the use of anti-hypertension drugs (especially beta-blockers) was associated with a higher risk of psoriasis. Continue reading…