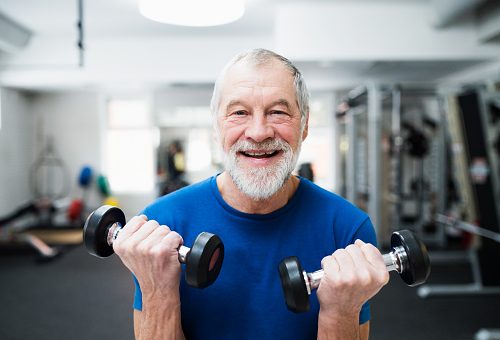 Polymyositis is a muscle disease that causes muscle weakness through inflammation (myositis means muscle inflammation). It is a rare form of arthritis that affects muscles in the torso on both sides of the body, making it difficult to stand up from a seated position, climb stairs, lift objects, or reach above the head. Most commonly, the disease is found in patients ranging from 30–60. It is more often found in people who are black and in females. The disease is rarely seen in adults under 20 or children. Polymyositis is a slowly developing condition, which can take years to fully onset.

What are the causes of polymyositis?

Symptoms and complications of polymyositis

Symptoms of polymyositis tend to develop slowly for all patients, except when the condition does occur in children, when they come on quite quickly.

Major symptoms include muscle weakening in the muscles around the torso, in the hips, thighs, shoulders, upper arms, and neck. The weakness develops on both sides of the body, gradually worsening as the condition progresses.

Additional symptoms include pain in the joints, difficulty swallowing, fever, fatigue, and weight loss. Raynaud syndrome, which is characterized by paleness, tingling, and numbness in the fingers in response to emotional stress, can also occur, but most often only in people suffering from multiple autoimmune disorders. Muscles in the hands, feet, and face tend not to be affected by the condition.

The condition can sometimes affect internal organs, including the heart and lungs. When this occurs, the patient may develop abnormal heart rhythms, shortness of breath, a cough, or pneumonia. In children, additional symptoms can include vomiting blood, black and tarry stools, severe abdominal pain, and tearing in the bowel.

Polymyositis is also often associated with other conditions such as:

How to diagnose polymyositis

Correct diagnosis of polymyositis is important, as it can be mistaken for muscular dystrophy. Diagnosis tools include medical history, physical exam, electromyography (which involves attaching wires to the skin to measure muscle movement), a muscle biopsy, imaging scans, blood tests, and other tests done to exclude infection in the muscles. A muscle biopsy can allow doctors to determine if there is degermation in the muscles and identify polymyositis as the definitive cause. Polymyositis produces particular antibodies, which can be detected through specific blood tests for a definitive diagnosis also.


Treatment and prognosis of polymyositis

There is no cure for this disease, but ongoing treatment can manage the symptoms and most patients respond well to a consistent course of treatments combining medications and therapy. Residual weakness still occurs in approximately 30 percent of patients, nonetheless. If treatment is delayed, patients can suffer too much muscle degeneration to fully recover even if treated aggressively. The five-year survival rate for polymyositis is approximately 80 percent. Mortality is generally caused by additional conditions that are sometimes linked to polymyositis, as discussed above.

Medications that are commonly used include steroids for reduction of inflammation, immunosuppressants (which supress the immune system), and other medications used to treat arthritis. Occasionally, infusions of immunoglobulin, a blood product containing healthy antibodies, can be beneficial by blocking the infected antibodies. Continuous infusions are needed for this course of treatment to be beneficial long-term, however. Certain therapies can also benefit patients with polymyositis, including physical and speech therapies.

Some research shows benefits to adopting an anti-inflammatory diet in response to polymyositis. This involves cutting out inflammatory foods, including soft drinks, sugar, white flour and its biproducts, and foods high in omega-6 fatty acids. Beneficial anti-inflammatory foods include blueberries, spinach, strawberries, herring, mackerel, salmon, sardines, pineapple, and papaya. Spinach, in particular, is known to have anti-inflammatory properties and be high in essential vitamins. Research is limited on this treatment course, however, and any lifestyle changes should only be taken on with the knowledge and consult of your doctor.

Polymyositis is a very rare form of rheumatoid arthritis that presents as an autoimmune muscular degenerative disease, in which the antibodies in the muscles attack the healthy muscle cells causing inflammation. It is uncommon in children and presents most often in adults between the ages of 30 and 60. The disease affects muscles on both sides of the torso, which gradually become weaker and weaker. This causes patients to have trouble climbing stairs, rising from a seated or lying position, and difficulty lifting objects or raising arms above the head.

Symptoms are most often associated with muscle weakness and inflammation, but can also include pain in the joints, difficulty swallowing, fever, fatigue, and weight loss. The disease is commonly associated with other autoimmune disorders, like lupus and HIV, but is also found linked with increased risk of Scleroderma, Sjogren’s syndrome, cardiovascular disease, congestive heart failure, lung disease, and cancer.

There is no cure for the condition, but treatment options offer relief of symptoms. Most patients do not suffer further muscle weakening after a course of treatment has begun, but proper diagnosis is important, so treatment can be started as soon as possible to avoid further muscle degeneration.

Related: 16 muscular system diseases you should know about