Home » General Health » 16 muscular system diseases you should know about 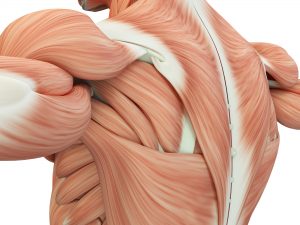 Muscular system diseases affect one of the most important structures in the human body: muscle. Our muscles produce the force necessary to help us move and function in the world. Without it, we would be bound to a single spot for the rest of our lives. Diseases of the muscular system can affect various aspects of this type of soft tissue, which there are many different types of. Each is separate and distinct, all controlled by our central nervous symptom in some capacity.

Walking, talking, sitting, and standing are all controlled by muscles. We even have muscles that are not under our conscious control, like the ones controlling our posture and the contraction of blood vessels. Muscles are commonly only associated with strength, but there are numerous actions that muscles do behind the scenes that help keep us alive and healthy.

There are three recognized types of muscles within our body. Each has been specialized to be the best suited to a particular task, which makes them an important component of normal functioning bodies. However, all three types use the movement of actin against myosin to create a contraction.

Causes and symptoms of muscle disorders

The causes of muscle disorders can be quite expansive, as their function relies on other processes in the body to be working optimally as well. Muscular disorders that result in the loss of function of a certain muscle group can lead to a condition called muscular atrophy, which is caused by wasting away of muscle tissue due to underutilization. Muscle atrophy is characterized by weakness and the shrinking of muscle mass. Pain may also be present in muscle disease and is primarily caused by defects in blood circulation, injury, or inflammation. Muscular pain may also result in additional symptoms of weakness and fatigue.

The following is a muscular system disease and disorders list outlining the intricacies of each condition.

A group of diseases that lead to weakness and loss of muscle mass. They are primarily caused by abnormal gene mutations that interfere with the production healthy muscle proteins. There are many different types of muscular dystrophy and some of the most common types present in early childhood and particularly in males. While symptoms may vary from case to case, most patients will eventually lose their ability to walk. Some may also develop trouble breathing or swallowing. Unfortunately, there is no cure for muscular dystrophy, with therapy and medication only slowing down the disease.

A broad term used to describe impairment or loss of motor function as a result of brain damage. It is believed that this damage occurs while still in the mother’s womb, as those with cerebral palsy are born with it. However, there are cases where the development of cerebral palsy can occur after birth. This condition affects muscle control, body movement, muscle coordination, reflexes, muscle tone, and balance.

Dermatomyositis is an inflammatory disease characterized by muscle weakness and a distinctive rash. The condition can occur in both children and adults, affecting mostly females. Skin changes are often described as appearing violet-colored or dusky red, most commonly on the face, eyelids, knuckles, elbows, knees, chest, and back. Rashes are often painful and itchy and are the first sign of dermatomyositis. Muscle weakness of the hips, thighs, shoulders, upper arms, and neck are commonly observed. Weakness can affect both sides of the body and become progressively worse.

Occurs due to excessive pressure buildup inside an enclosed area in the body. Compartment syndrome is commonly caused by swelling or bleeding after an injury that leads to an increase in pressure. The condition can be extremely painful, as when pressure builds to dangerous levels, it can decrease blood flow, preventing oxygenated blood from reaching the soft tissue and nerves.

A condition characterized by muscles that weaken and tire easily. It can affect any muscle of the body no matter the size or function. For instance, the jaw muscle may tire quickly, preventing the ability to chew food. Myasthenia gravis patients tend to take frequent rests to regain strength before resuming the task they were doing. This condition is relatively rare and only affects about 20 out of every 100,000 people. Treatment primarily consists of symptom management.

ALS is characterized by muscle weakness and atrophy—muscle wasting. It is due to the degeneration of upper and lower motor neurons of the body that are responsible for voluntary movement. Affected individuals ultimately lose their ability to initiate and control all voluntary movement, though bowel and bladder function, as well as eye movements, are typically spared. While behavioral and cognitive functioning usually remains intact, a small percentage may show signs of frontotemporal dementia. The disease can strike at any age but most commonly develops between the ages of 55 and 75.

A disease that specifically involves the mitochondria found in cells, commonly known as the energy factories of the cell. Mitochondrial encephalomyopathy is characterized by muscular and neurological problems such as muscle weakness, exercise intolerance, hearing loss, trouble with balance and coordination, seizures, and learning deficits.

A condition characterized by the rapid breakdown of damaged skeletal muscle. Injury to the muscle may be indirect or indirect, which then causes dead muscle fibers and constituents to be released into the bloodstream. The problem with this is that these can then cause serious complications with the kidneys, leading to kidney failure. Urine samples are often tea-colored or a dark inconsistency as a result.

A rare inflammatory disease that causes muscle weakness on both sides of the body. People around the age of 30 to 50 years are the demographic that develop the disease, with dark-skinned women primarily being affected. The condition can make it difficult to get up from a seated posture, climb stairs, or even reach overhead and life objects.

A condition characterized by widespread musculoskeletal pain that researchers believe is caused by amplified pain sensations as perceived by the brain. Women more commonly present with fibromyalgia and typically do not have a single triggering event, but sometimes the condition may begin after physical trauma, surgery, infection, or significant psychological stress. There is no cure for fibromyalgia. Symptoms may be managed using a variety of medications, exercise, and relaxation techniques.

Characterized by the muscles relaxing slowly after contraction or stimulation. Common problems with this condition include not being able to release the grip on certain objects or having trouble walking. Myotonia can affect any muscle group, with patients needing to make repeated efforts to calm down the muscles to improve the condition.

A chronic pain disorder characterized by pain in seemingly unrelated parts of the body when pressing on certain trigger points elsewhere on the body, this is called referred pain. The connective tissue covering muscles is the source of pain and develops after a muscle has been contacted repetitively. This can be seen commonly when a patient is performing jobs or hobbies that involve repetitive motions.

A rotator cuff is a group of muscles and tendons surrounding the shoulder joint, helping to keep the head of your upper arm within the shoulder socket. Injury to this structure can produce a dull ache of the shoulder, which can worsen when you sleep on the affected side. Those who use their shoulder muscles repeatedly for their job or during sports can get a rotator cuff injury.

Characterized as an involuntary contraction of one or more of your muscles and is sometimes referred to as a “charley horse.” These muscle cramps make it temporarily impossible to use the affected muscle with cases typically occurring during hot weather, during exercise, or during physical labor. It is recommended to avoid dehydration and to stretch your muscles to prevent muscle cramps.

Sprains are common injuries that occur due to stretching or tearing of tough bands of fibrous tissue that connect bones together, called ligaments. Strains occur due to a stretch or tear of muscle or tendons.

Inflammation of the tendon—a tough band of fibrous connective tissue that usually connects muscle and bone. This condition is common due to overuse or repetitive movements of muscles and tissues involved.