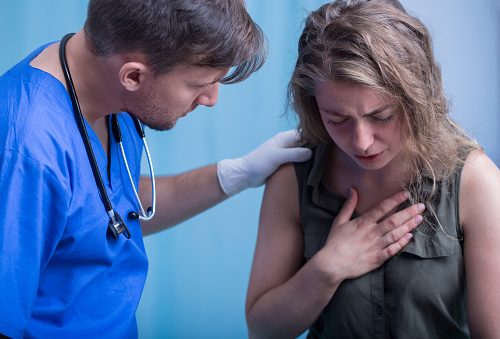 Myasthenic crisis is a complication of a condition known as myasthenia gravis, which is characterized by weakness and rapid fatigue of voluntarily controlled muscles. It’s considered a neuromuscular autoimmune disease that can affect the muscles of the eyes, face, and eventually other parts of the body.

The percentage of myasthenic patients who progress to myasthenic crisis is between 15 to 20 percent. Women are twice as likely to experience myasthenic crisis than men, with women having a higher rate prior to the age of 55 and men and women have equal rates post-55.

Signs and Symptoms of Myasthenic Crisis

Understanding the background of myasthenia gravis will give some context as to how myasthenia gravis with acute exacerbation can lead to a myasthenic crisis. In this condition, antibodies either block or destroy nicotinic acetylcholine receptors at the neuromuscular junction between the nerve and muscle. This structure serves to communicate the control of muscular contraction.

The breakdown of normal communication between nerves and muscles is the hallmark of myasthenia gravis and is characterized by symptoms such as weakness of the arm or leg muscles, double vision, drooping eyelids, and difficulties with speech, chewing, swallowing, and breathing.

Pulmonary function tests (PFTs): An evaluation of how well your lungs are working by measuring lung volume, capacity, rate of flow, and gas exchange.

Arterial blood gases (ABG): A test to assess the amount of oxygen and carbon dioxide in your blood. It is an accurate measurement of how well your lungs are working. Having increased levels of carbon dioxide will tell doctors that you’re not perfusing enough oxygen into your bloodstream due to mechanical failure of the lungs.

Chest x-ray: Used to rule out any other possible causes for your presenting symptoms. An x-ray of the chest will allow doctors to view the heart and lung structure, looking for signs of pneumonia or possible fluid that has accumulated around the heart or lungs.

Computer tomography (CT) scan: A more detailed imaging machine that allows doctors to get a better view of internal organs. CT scans are better for looking at soft tissue, such as the lungs and heart. CT is also great for looking at the thymus gland, of which myasthenia gravis patients are known for having issues with.

MRI: The best imaging scan that gives an even more detailed image compared to a CT scan. It uses powerful magnets and a computer to take pictures of the desired body part. Because of this, having any type of metal in the body may cause serious injury and should be disclosed to your doctor beforehand.

Myasthenic crisis treatment is one that needs to be implemented quickly with the goal of treatment to make respiratory muscles stronger to breathe better. If this is not done in a timely fashion, lungs may begin to fail and endanger the patient’s life due to suffocation. The following are the most common strategies when facing a myasthenic crisis.

Myasthenic crisis prevention comes in the form of decreasing the risk of myasthenia gravis. However, about 50 percent of patients developing a myasthenic crisis will not present with any precipitating factors. Factors such as an infection should be identified and treated as quickly as possible.

The following are actions taken to prevent myasthenia gravis: