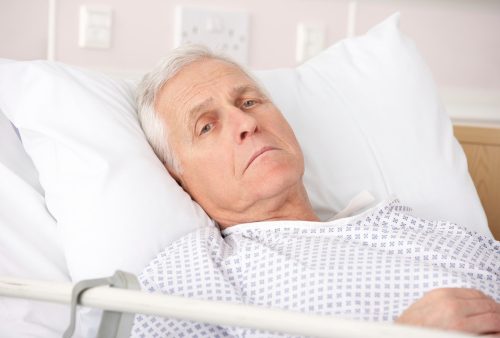 Locked-in syndrome is a neurological condition where the body experiences complete paralysis, except for the eyes. These individuals are usually completely conscious of the environment around them but are “locked-in,” unable to move any muscle in their body, only retaining their eye movements. Their ability to speak is also compromised, and their most effective way to communicate is through eye blinks. What causes locked in syndrome is damage to the pons, a part of the brainstem containing vital nerve fibers involved in voluntary movement and relaying information to areas in the brain. This area of the brain is also involved in the sensation of sleep paralysis, whereby similar symptoms of locked-in syndrome occur, although transiently.

Signs and symptoms of locked-in syndrome

Locked-in syndrome displays all the expected features of complete paralysis, making patients bedridden and reliant on the care of others. The only difference is that movement of the eyes is usually preserved, although this may be effected to an extent, as some individuals may be able to move their eyes up and down, but not side to side. The classic signs of locked-in syndrome include not being able to consciously or voluntarily do any of the following:

Initially, a person is completely comatose before being diagnosed with locked-in syndrome, and as they slowly regain consciousness, they remain paralyzed with the exception of the eyes.

Experiencing locked-in syndrome can be a scary experience—not being able to move and talk can bring on fits of anxiety and fear, as anyone who has experienced sleep paralysis will tell you. In locked-in syndrome, however, damage to a specific part of the brain stem is the primary cause. It is a rare neurological disorder that affects both males and females of all ages equally.

The pons is a structure of the brainstem that is involved in relaying messages from the brain to the cerebellum. It contains important neuronal pathways involved with functions such as sleep, respiration, swallowing, and bladder control. Damage to the pons disrupts these pathways, leaving those affected devoid of all its various responsivities.

More often than not, damage occurs due to a lack of blood flow (perfusion) to this area of the brainstem which occurs primarily due to the blockage of blood (infraction) or bleeding of the area (hemorrhage)—commonly caused by blood clots or stroke. Instances related to trauma are rare but have been known to happen as well. The following are additional conditions that may result in locked-in syndrome:

Akinetic mutism: A rare neurological condition whereby an individual is unable to move (akinetic) or talk (mute) but is still conscious. These individuals are unable to communicate and lay unresponsive. It is considered a minimally conscious state due to vascular or traumatic damage in the midline frontal gray matter.

Guillain-Barre syndrome: A rare autoimmune disorder that presents with weakness, numbness, and tingling. Typically, symptoms begin in the hands and feet, and can eventually progress to paralysis

Myasthenia gravis: A neuromuscular disease, commonly affecting the muscles of the eyes, face, and muscles involved with swallowing.

Unfortunately, there is no diagnostic test to tell for sure that an individual is suffering from locked-in syndrome. It is more of a clinical diagnosis, with a doctor looking for the typical signs and symptoms of the disorder and possibly ruling out other forms of paralysis. Other tests may include:

Magnetic resonance imaging (MRI): Can show damage to the pons. The use of angiography (examination of blood vessels) with an MRI may also aid in locating the site of blood vessel blockage if infarction was a probable cause.

Electroencephalogram (EEG): The measure of electrical activity of the brain. Helps to determine if the individual is experiencing normal brain activity and sleep-wake cycles—features of locked-in syndrome. EEG’s may also be used to test brain activity in response to stimuli.

Electromyography and nerve conduction study: Can be used to rule out damage to the muscles and nerves.

There is no specific treatment option for locked-in syndrome, and unfortunately, no locked-in syndrome cure. Therapy is focused on treating any underlying cause of its occurrence. This may include clot-busting medication (thrombolytic therapy) if a stroke is suspected.

Supportive care is a mainstay of locked-in syndrome recovery and to maximize locked-in syndrome life expectancy, often with the use of an artificial aid for breathing via tracheostomy (a tube going in the airway), in addition to feeding and drinking tubes. Establishing a form of communication through eye blinks soon after the diagnosis is encouraged.