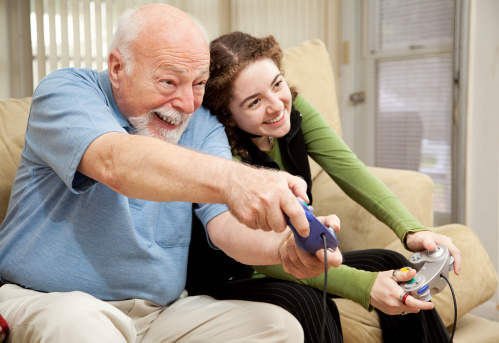 Video games have been a part of popular culture for decades now and show no signs of slowing down. However, there is still a strong stigma attached to playing games, as they are viewed by some as being childish or a waste of time.

A new study conducted by Université de Montréal in cooperation with the Institut Universitaire de gériatrie de Montréal (IUGM) with collaborators from Memorial University in Newfoundland and Montreal’s Douglas Hospital Research Centre finds that older people may gain the most benefit from playing games like Super Mario 64, helping stave off mild cognitive impairment and maybe even prevent Alzheimer’s disease.

Cognitive impairment is defined as the decline in memory and thinking skills. It is one of the major characteristics of dementia, of which Alzheimer’s disease is the most common form.

Positive results found in both young and old

Two previous studies looking into the impact of video games on young adults in their twenties found that they had increases in the grey matter after playing 3D video games of logic and puzzles, as seen in games like Super Mario 64. This region of the brain is associated with spatial and episodic memory, a key factor for cognitive health that can act as a neurological marker for neurological disorders.

The researchers wanted to know if the positive effect of video games could be translated to the senior population.


The study in question involved 33 people between the ages of 55 and 75 who were randomly assigned to three separate groups. Participants were either assigned to play Super Mario 64 or take piano lessons (for the first time in their lives) or not perform any particular task at all. Each group was instructed to perform their task for 30 minutes a day, five days a week, for a total of six months.

Various measurements of gray matter were taken before and after the study had completed. Particular areas of interest include:

All participants in the video game group saw an increase in grey matter volume in the hippocampus and cerebellum.
Additionally, short-term memory also saw improvement.

The brain benefits from not staying idle

Those taking piano lessons also saw improvement in grey matter volume in the dorsolateral prefrontal cortex and cerebellum. Those not having a particular task saw the opposite, with signs of atrophy in all three areas of the brain instead.

“3D video games engage the hippocampus into creating a cognitive map, or a mental representation, of the virtual environment that the brain is exploring. Several studies suggest stimulation of the hippocampus increases both functional activity and gray matter within this region,” said psychology professor Gregory West.

He goes on to say that when the brain is not learning anything new, it begins to shrink, especially as we get older. However, it can be reversed by playing games like the ones used in this study or by simply learning something new.