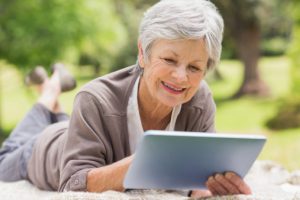 As we age, one of our main concerns is losing our memory and our ability to remain sharp. We try to stay engaged in mentally stimulating activities like reading and learning new things, but not everyone has the time.

Most people don’t think of video games as intelligence builders, however, researchers from the University of Cambridge have developed a brain training game that could help improve the memory of patients in the earliest stages of dementia.

Dementia is a broad category of brain disease that causes a long term and often gradual decrease in the ability to think and remember. So much so that it affects daily functioning. The transition stage between “healthy aging” and dementia is called amnestic mild cognitive impairment (aMCI). It is characterized by daily memory difficulties and problems with motivation.

Currently, there is no treatment available for this stage of cognitive impairment.

While there are cognitive training exercises that have proven to show some benefit, they are typically repetitive and boring, affecting patients’ motivation.

To test the app’s effectiveness on cognition and motivation, the researchers set out to study its effects on aMCI patients. A total of 43 patients with the early memory condition were randomly assigned to either cognitive training with the app or a control group who simply continued their clinic visits as usual.

The objective of the game was to win gold coins by challenging players to associate different geometric patterns with different locations. The more correct answers, the more coins the players receive. As players get better at the game, a higher number of geometric patterns is presented, helping to tailor difficulty to an individual’s performance while keeping them engaged and motivated.

The results of the study showed that those who played the game made fewer errors, needed fewer trials, and improved their memory score by about 40 percent.

Most promising was that those who were part of the gaming app group remembered more information on the first attempt of an episodic memory test. This can be similar to remembering where you last left your car keys or where you parked the car in a parking lot.

“Good brain health is as important as good physical health. There’s increasing evidence that brain training can be beneficial for boosting cognition and brain health, but it needs to be based on sound research and developed with patients. It also needs to be enjoyable enough to motivate users to keep to their program. Our game allowed us to individualize a patient’s cognitive training program and make it fun and enjoyable for them to use,” said Professor Barbara Sahakian, co-inventor of the game.

The researchers plan on doing a larger scale study to determine how well these results translate over an extended period of time.

What are the best video games for brain function?