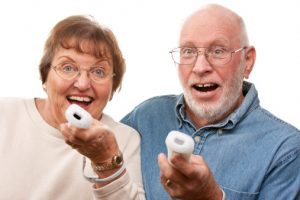 Playing video games is often considered a waste of time and is negatively associated with laziness and being antisocial. This notion exists because video games are usually a singular experience, with the player huddled in front of a television, fixed on the screen. But this couldn’t be further from the truth, and is perhaps a negative perception perpetuated by concerned parents wanting their kids to spend more time outdoors. According to new research, video games that involve physical activity can significantly boost brain health, especially as we get older.

Researchers at the University of Manchester say that video game systems that use physical activity for gaming, such as the Nintendo Wii or the Microsoft Xbox Kinect, can help boost brain functioning in people with neurological impairment as well as keep their minds healthy and active. While these devices are several years old now, new advances have pushed the video game industry into a new and exciting direction, exploring the concept of virtual reality. This new technology allows players to be fully immersed in a game world while still maintaining a full range of motion similarly seen with the aforementioned game console devices. However, VR devices were not part of this particular study, owing to their relatively recent introduction to the market.

The study in question involved aggregated data from 17 clinical trials and involved a total of 926 participants examining the effects of active gaming on cognitive functioning. What they found was that physical activity provided by physical-based video games had a greater impact on brain functioning than regular exercise alone, suggesting that having additional brain stimulation during physical activity provides more benefit than simply just moving around.
The researchers go on to say that various neurological conditions such as Parkinson’s or Alzheimer’s disease can impede cognitive functioning and reduce patients’ ability to function on a daily basis. Active video games may promote the rehabilitation of these patients by promoting brain heath and healthy aging. The results of the study provided real evidence that these type of video games can significantly improve overall cognitive functioning, being particularly beneficial for attention, executive function, and visuospatial abilities.

“The brain benefits may be because these activities are physically demanding, while also requiring concentration and cognitive effort, resulting in positive effects on body and brain. We hope this research will encourage the NHS and social services to take up active gaming as part of their support packages—as some are already starting to do,” said Dr. Emma Stanmore, a researcher on the study.