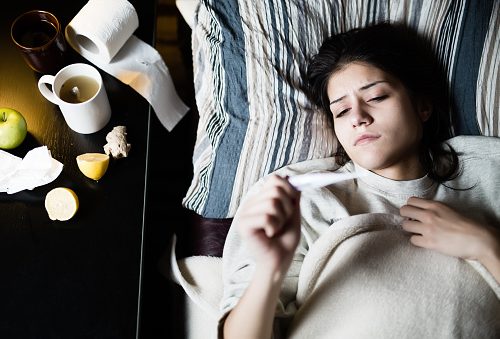 Norovirus and flu (influenza) are often mistaken for one another, but they are two very different illnesses. What could be fueling the confusion is that norovirus is often referred to as the stomach flu – but, in fact, there is no such thing as stomach flu.

You see, the flu is a condition that affects the respiratory system. When you’re fighting the flu, your immune system is weakened. As a result, you are at a higher risk of catching other illnesses, such as norovirus. That’s oftentimes people associate gastrointestinal symptoms with the flu, but the two are completely different conditions.

Norovirus is a highly contagious virus that does not have a cure and generally must run its course through your body. The resulting symptoms include vomiting, diarrhea, and abdominal cramping. Only rarely will norovirus will cause a fever – unlike the flu. Norovirus is also very quick to pass – typically, no more than 48 hours. Therefore, if you are still ill after a day or two, most likely, it is not norovirus, but something else.

Here we will explain the differences and similarities between influenza and norovirus to help you better understand each unique illness.

Norovirus is the leading cause of gastroenteritis (inflammation of the stomach, intestines, or both). In developed countries, cases of norovirus are one in five, and in developing countries they are one in six. In developing countries, there are more bacteria and other pathogens that can result in gastroenteritis, meaning there’s generally less norovirus cases.

Although the influenza season this past year was quite mild, the flu affects people worldwide and can even be fatal, especially among children, older adults, and those with weakened immune systems. Different parts of the world may experience different strains of influenza – the most common in North America this year were H1N1 and influenza B strains.

Here is a table that outlines the symptoms of both norovirus and influenza.

A generally healthy person will bounce back from the flu within a few days, but in high-risk groups – children, seniors, pregnant women, and those with weakened immune systems – complications may arise.

Some complications from the flu are pneumonia, bronchitis, sinus, and ear infection, and in rare cases the flu can even be fatal. The flu can be worse in individuals with asthma or congestive heart failure as well.

The main complication resulting from norovirus is dehydration, and that is why it’s so important to stay hydrated during this time. Signs and symptoms of dehydration are fatigue, dry mouth, dizziness, and decreased urine output.

The flu is spread through coughing and sneezing from an infected person. A cough or sneeze has the ability to pass on germs and the virus up to six feet away. These infected droplets can land on people around you and enter the lungs with an inhale.

Influenza can also be transmitted from contaminated surfaces and objects, meaning if you touch a surface that has been touched by an infected person you can catch influenza. This is why it’s so important to frequently and properly wash your hands. If soap and water is not available, an alcohol-based sanitizer can help kill germs, too.

Norovirus outbreaks commonly occur in settings where there are many people in close quarters, such as cruise ships, daycare centers, retirement homes, dining halls, school dormitories, and hospitals.

There is no cure or specific treatment for norovirus. Your best bet is to rest and drink plenty of fluids in order to prevent dehydration.

Influenza often does not require treatment as well and will pass on its own. Some treatment methods are to aid in symptom relief, such as taking painkillers and sticking to a bland diet. In some cases, your doctor will prescribe antiviral drugs. You should also avoid contact with others and get as much rest as possible.

Prevention of influenza can be easily done with a flu shot along with proper hygiene and caution around sick people. Norovirus is similar in the sense that you should avoid sick people, but unfortunately there is no vaccine available. Avoid sharing beverages, food, utensils, and other objects, and always wash your hands.

Norovirus can also be prevented by properly washing, preparing, and storing food. If you are sick, avoid making meals for others.

By following these prevention tips, you can better protect yourself from norovirus and influenza.