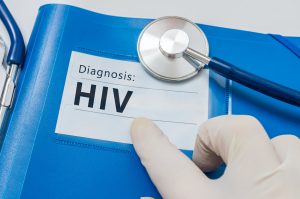 Multiple sclerosis risk is lower in HIV-infected patients, according to research. The association comes from the chronic dampening down of the immune system associated with HIV, along with the antiretroviral medications taken to treat HIV. If found causal in future studies, this association may offer insight on possible new treatments for multiple sclerosis (MS).

The results of the study found there may be a possibility to treat MS with antiretrovirals, but the numbers were too small to reach statistical significance.

The researchers looked at over 21,000 HIV patients, along with 5.3 million people with minor conditions as controls, monitored for MS occurrences over a seven-year span. Those with HIV were found to be 62 percent less likely to develop MS. The longer a person had HIV, the less likely they were to develop MS.

The authors wrote, “If subsequent studies demonstrate there is a causal protective effect of HIV and/or its treatment, and if the magnitude of it proves to be similar…this would be the largest protective effect of any factor yet observed in relation to the development of MS.”

Additional research is required to show the effectiveness of antiretroviral drugs for multiple sclerosis.

Some researchers in Britain and Europe believe that multiple sclerosis is a result of activation of human endogenous retroviruses (HERVs). A Swedish company developed a monoclonal antibody called GNbAC1 targeting a specific HERV element.

The connection was first established when an HIV and MS patient stopped experiencing any multiple sclerosis symptoms after HIV treatment. Multiple sclerosis wasn’t gone completely as MRI scans still revealed lesions characteristic of the condition, but the symptoms had disappeared.

Larger studies have also yielded similar results where researchers found rates of multiple sclerosis were lower in HIV patients. But numbers were so low they weren’t statically significant.

Future research is required to better understand the link between HIV and multiple sclerosis, especially to find out whether antiretroviral drugs may be beneficial for the condition.

Much evidence has come to light revealing the benefits of fasting-like diets, especially for the reduction of symptoms in multiple sclerosis. Many individuals resort to fasting-like diets as a means to lose weight, but the latest findings reveal benefits beyond the scale. Continue reading…