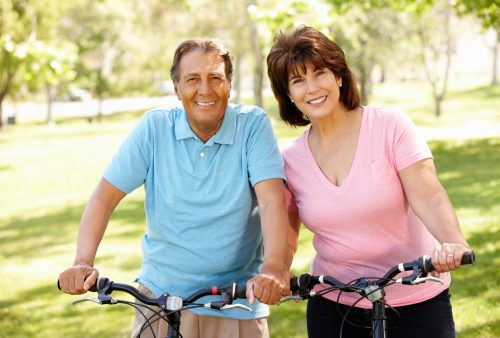 Mental health and brain power can be restored with vigorous exercise in older adults. The findings were uncovered through the use of imaging scans by UC Davis Health System, revealing that vigorous exercise increases levels of two common neurotransmitters that are responsible for messaging and communication within the brain. The neurotransmitters are glutamate and gamma-aminobutyric acid, or GABA.

Study lead author Richard Maddock said, “Major depressive disorder is often characterized by depleted glutamate and GABA, which return to normal when mental health is restored. Our study shows that exercise activates the metabolic pathway that replenishes these neurotransmitters.”

“From a metabolic standpoint, vigorous exercise is the most demanding activity the brain encounters, much more intense than calculus or chess, but nobody knows what happens with all that energy. Apparently, one of the things it’s doing is making more neurotransmitters,” Maddock added.

Not only does the research offer insight into how the brain uses energy during exercise, but it sheds light on the dangers of a sedentary lifestyle which mounting evidence is piling up against.

“It is not clear what causes people to ‘hit the wall’ or get suddenly fatigued when exercising. We often think of this point in terms of muscles being depleted of oxygen and energy molecules. But part of it may be that the brain has reached its limit,” said Maddock.

The study looked at 38 volunteers who exercised on a stationary bicycle, reaching at least 85 percent of their predicted maximum heart rate. The researchers used imaging scans to measure glutamate and GABA. Neurotransmitter measures were taken at different parts of the brain after three vigorous exercises. Those who exercised saw levels of glutamate and GABA increase, but non-exercisers (the controls) did not see any change.

Maddock said, “There was a correlation between the resting levels of glutamate in the brain and how much people exercised during the preceding week. It’s preliminary information, but it’s very encouraging.”

“We are offering another view on why regular physical activity may be important to prevent or treat depression. Not every depressed person who exercises will improve, but many will. It’s possible that we can help identify the patients who would most benefit from an exercise prescription,” concluded Maddock.

Lead author Eric Vidoni added, “For improved brain function, the results suggest that it’s not enough just to exercise more. You have to do it in a way that bumps up your overall fitness level.”

An alternative study published in Journal of the International Neuropsychological Society found similar results. Corresponding author Scott Hayes, Ph.D., said, “Our findings that physical activity is positively associated with memory is appealing for a variety of reasons. Everyone knows that physical activity is a critical component to ward off obesity and cardiovascular-related disease. Knowing that a lack of physical activity may negatively impact one’s memory abilities will be an additional piece of information to motivate folks to stay more active.”

The studies go to show the importance of exercise and moving around as opposed to living a sedentary lifestyle, not only for heart health, but for your mind as well.

Physical activity has been shown to improve memory and slow down cognitive decline in older adults. The recent study found older adults that partake in walking or jogging performed better on memory tasks, compared to those who are sedentary. Continue reading…

Memory problems are quite common in seniors, but new findings suggest that seniors’ memory may improve through computer use. The findings reveal that using computer even once a week is enough to help ward off age-related memory decline and improve thinking. Continue reading…