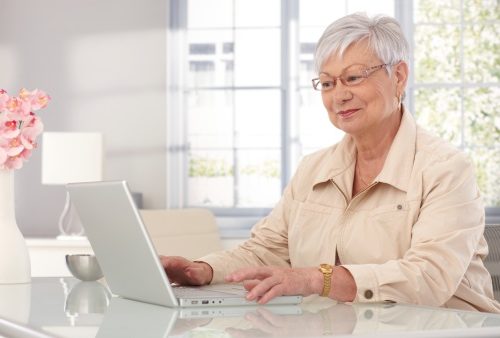 Memory problems are quite common in seniors, but new findings suggest that seniors’ memory may improve through computer use. The findings reveal that using computer even once a week is enough to help ward off age-related memory decline and improve thinking.

Computer users had a 42 percent lower risk of developing mild cognitive impairment (MCI), which is a precursor to dementia.

Study author Janina Krell-Roesch said, “We did not investigate mechanisms that might underlie the association between mentally stimulating activities such as computer use and the risk of incident MCI. Therefore, we can only speculate why computer use might be of help.”
The researchers suggest that seniors who use computers may also be more inclined to partake in healthier lifestyle habits. Or, it could simply be that computers do help improve brain function. Computers may also assist seniors in coping and compensating for minor memory problems. In fact, it could be a combination of all three.

The study included over 1,900 seniors, all without memory or thinking problems when the study began. The seniors completed activity questionnaires about the previous year. Stimulating activities included reading, socializing, game-playing, craft-making, and computer use. The participants were followed on average for four years.

The researchers found engaging in any of the stimulating activities at least once weekly helped lower the risk of MCI. Computer use, specifically, was associated with a 42 percent reduction in MCI. Only 18 percent of computer users developed memory and thinking problems, compared to 31 percent of those who did not use a computer. The researchers are unsure if increasing computer time could help ward off MCI even further.

Additional analysis is required to determine frequency of computer use associated with the greatest mind-boosting benefits.