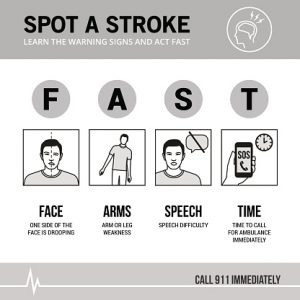 Over 400,000 American women suffer from stroke every year. Some people may be surprised to hear that this number is about 55,000 more than men.

Recent surveys suggest that a significant number of women don’t know the primary symptoms of stroke or the fact that stroke prevention is not “one-size-fits-all.”

Medical advances over the last several decades have decreased the cases of stroke. However, it’s still the fourth-leading cause of death for Americans, and 60 percent of strokes occur in women.

For the first time, specific stroke prevention guidelines for women have been established, thanks to the American Heart Association, the American Stroke Association, with the help of an expert from the University of Alabama at Birmingham.

Men and women are different physiologically, so prevention tips need to be designed with women in mind, beginning in the child-bearing years.

The common risk factors that we hear about when it comes to stroke are the same for both men and women. These are:

So how do men and women really differ in stroke risk? Scientists say pregnancy, childbirth, and hormones all play a major role. Stroke-related problems are rare during pregnancy, but experts say this is when the first signs of vascular disease can appear. Studies show that women who have eclampsia and preeclampsia – conditions marked by high blood pressure during pregnancy – are twice as likely to have a stroke later in life.

Other concerns unique to women and risk of stroke include:

How does stroke occur?

When a blood vessel that carries oxygen and nutrients to the brain is either blocked by a clot or bursts, oxygen can’t reach the brain, causing a stroke. As a result, brain cells die. Stroke survivors can be left with a long list of debilitating aftereffects.

Women have a longer lifespan than men, so their lifetime risk is higher. The risk increases later in life because of additional risk factors acquired, such as obesity and high blood pressure. Because of age, women often have more challenging recovery from stroke than men, their quality of life decreases, and they end up in long-term care residences.

Based on scientific investigation, including a study of all risk factors, here are the Guidelines for Prevention of Stroke in Women distributed throughout the medical community:

With emphasis on early prevention, women can build on the strategies to prevent stroke and live healthy and strong in their golden years!