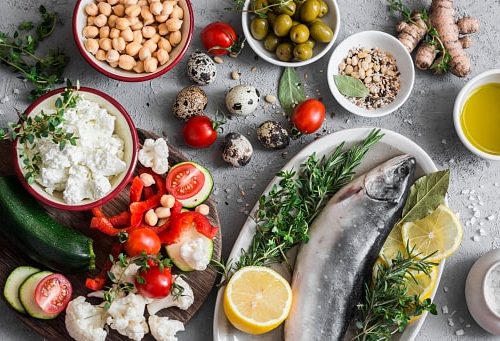 A new study from the University of East Anglia has found that eating a Mediterranean style diet could reduce bone density loss in patients with osteoporosis. The Mediterranean diet is characterized by being rich in fruit, vegetables, nuts, unrefined cereals, olive oil, and fish as well as limiting the intake of dairy and meat. The study found that within 12 months of beginning the diet, patients showed a significant reduction in hip bone loss when compared to osteoporosis patients who hadn’t followed the Mediterranean diet.

This is the first study of its kind to examine the effects of following the Mediterranean diet on bone density in older adult patients. The study included 1,142 participants aged 65 to 79 from across Europe. The participants were separated into two groups, the experimental group who would be instructed to follow the Mediterranean diet and the control group who would follow their regular diet. The researchers measured the bone densities of both groups at the outset of the experiment and after 12 months’ time.

The participants in the experimental group who did not have osteoporosis showed no increase or decrease in bone health after the 12 months. Those in the experimental group who had osteoporosis, on the other hand, showed a significant impact on bone density, specifically in the density of the femoral neck, after following the Mediterranean diet. The femoral neck is part of the femur, which connects it into the hip bone. This area is often the cause of the need for hip replacements or injury in many elderly people.

“This is a particularly sensitive area for osteoporosis as loss of bone in the femoral neck is often the cause of hip fracture, which is common in elderly people with osteoporosis,” said Susan Fairweather-Tait, the lead researcher in the study. “Bone takes a long time to form, so the 12-month trial, although one of the longest to date, was still a relatively short time frame to show an impact. So, the fact we were able to see a marked difference between the groups even in just this one area is significant.”

If the participants could maintain the diet for a longer period of time in future studies, the researchers behind the current study feel they may also see beneficial results in the bone densities of aging people without osteoporosis, too. Future studies will also need to focus on a larger group of patients with osteoporosis, as only 10 percent of the participants had been diagnosed with osteoporosis at the outset of the current study.