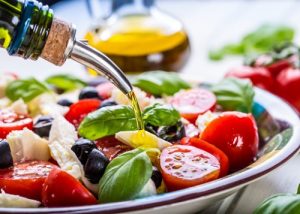 A new study has shown that older adults can reduce the risk of becoming frail by following the Mediterranean diet. Frailty is a highly common syndrome that often develops in older adults. The risk of frailty is well known to increase with age.

Frailty is related to sustaining additional damage during a fall, eventual disability, dementia, or even premature death. Overall, those suffering from frailty in old age are said to experience a lower quality of life.

One of the major factors leading to frailty is nutrition. Related to frailty specifically is the lack of proteins and other vitamins. According to the study, the Mediterranean diet “consists of abundant plant foods (fruit, vegetable, cereals, potatoes, beans, nuts, and seeds), olive oil as the principal source of fat, dairy products, ﬁsh and poultry consumed in low to moderate amounts,” as well as up to four eggs per week and low amounts of red meat and wine. This type of diet is known to reduce the risk of cardiovascular disease, neurodegenerative diseases, diabetes, and cancer.

The study examined the data of 5,789 community-dwelling older people followed for an average of nearly four years, among several other similar datasets globally. They discovered that following the Mediterranean diet was related to a lower reported risk of frailty across all data they examined. The researchers believe there is a viable explanation for this connection.


Foods Consumed in the Mediterranean Diet Offer Many Health Benefits

As the Mediterranean diet is rich in antioxidants, those who follow it reap the benefits of consuming these foods. Oxidative stress is one of the risk factors for developing frailty in older age. Thus, it naturally follows that consuming antioxidants would help combat the development of oxidative stress.

Inflammation is also another indicator of the risk of developing frailty. This diet contains many foods high in anti-inflammatory properties and, in fact, the researchers noted that the populations they examined showed a low number of inflammation markers. This type of diet is also related to improved cognitive function and lower rates of cognitive decline, leading to Alzheimer’s and dementia.

Ultimately, it appears that adhering to the Mediterranean diet results in many health benefits, relating to lower rates of any number of serious medical conditions that are known to develop later in life. The researchers feel that further exploration of the specifics of their findings would be beneficial to relate which components of the foods are related to the decreased risk of so many health conditions.

The breakdown of foods and micronutrients is a complex process and the interrelation that foods consumed together may result in is not entirely predictable. Knowing exactly how these foods are broken down and the interaction of the micronutrients with each other is another crucial step to fully understand the health benefits of following such a diet.

How to spot antioxidants in the supermarket