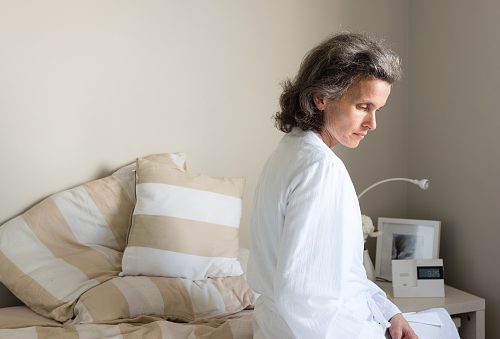 Bad news for women who experience or who have gone through menopause: research suggests it could increase the risk of Alzheimer’s. The researchers found that metabolic changes occur in perimenopausal women.

Two-thirds of Alzheimer’s patients in the U.S. are women.

The exact mechanisms that link menopause with Alzheimer’s disease are still unknown, but previous studies have hinted that the transition into menopause may play a vital role. During this transition, the researchers noted there are metabolic and neurological changes. This is what prompted researchers to dig deeper.

The researchers used positron emission tomography imaging technology to examine the brains of 43 women to see how it metabolizes glucose. Glucose is a main source of energy for the brain.

Previous studies have found that low levels of glucose precede or may even trigger Alzheimer’s disease.

A key metabolic enzyme known as mitochondrial cytochrome oxidase was found to be less abundant among menopausal and perimenopausal women. These women were also found to score lower on memory tests.

The latest findings support previous study findings that menopause increases the risk of beta-amyloid protein, which is a biomarker of Alzheimer’s disease.


Another contributing factor to Alzheimer’s disease in menopause is a drop in estrogen, which naturally occurs as a result of menopause.

Lead author Dr. Lisa Mosconi explained, “Our findings show that the loss of estrogen in menopause doesn’t just diminish fertility. It also means the loss of a key neuroprotective element in the female brain and a higher vulnerability to brain aging and Alzheimer’s disease.”

“We urgently need to address these problems because, currently, 850 million women worldwide are entering or have entered menopause. Our studies demonstrate that women need medical attention in their 40s, well in advance of any endocrine or neurological symptoms. [There may be a] critical window of opportunity when women are in their 40s and 50s, to detect metabolic signs of higher Alzheimer’s risk and apply strategies to reduce that risk,” Dr. Mosconi warned.

As of now, Dr. Mosconi suggests that more research needs to be conducted on whether or not hormone replacement therapy is a viable solution to prevent Alzheimer’s.