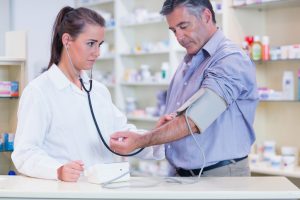 A new study has found that one in four Medicare patients – or five million Americans – aren’t taking their blood pressure medication as directed. Failure to follow the instructions as indicated increases patient’s risk of heart attack and stroke.

The study analyzed 18.5 million Medicare Part D enrollees in 2014 and found that 26 percent of them either skipped a dose of their blood pressure medication or stopped taking the drug altogether, even if they had not been instructed to do so.

CDC director Dr. Tom Frieden explained, “That’s particularly troubling, because other research indicates that up to 25 percent of new prescriptions for blood pressure medicine are never even filled in the first place. Of those prescribed those regimens, maybe a quarter don’t even start them, and now we’re finding that another quarter don’t continue them.”

Uncontrolled blood pressure is not only associated with heart disease and stroke, but also mental decline and dementia. Nearly 70 percent of seniors in the U.S. have high blood pressure, but only a little over half of them have it under control.

Although heart-healthy lifestyle changes can be effective at reducing blood pressure, sometimes they are not enough, so medications are required to further bring the blood pressure levels down. “Critically, medications will be necessary for the vast majority of people with high blood pressure, but they only work if they are taken,” Dr. Frieden added.

The study also found that people living in the South – also known as the ‘stroke belt’ – have the lowest adherence to blood pressure medication in the U.S.