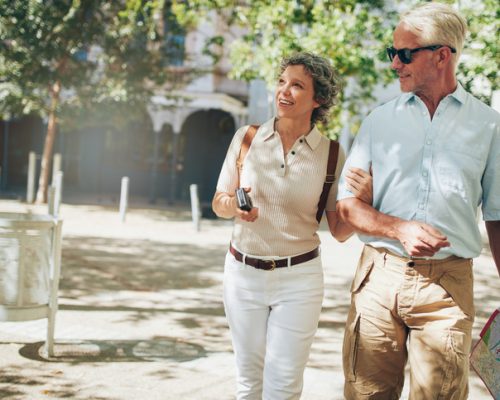 High blood pressure, high cholesterol, and diabetes risk may be lowered with brisk walking. The researchers found that the impact of brisk walking is similar to that of running, which means, regardless of your fitness level or age, you can still manage to successfully lower your blood pressure and cholesterol, and control your diabetes with an activity as easy as walking.

The researchers analyzed 33,060 runners and 15,045 walkers. They found the same amount of energy used for moderate-intensity walking and vigorous-intensity running yielded similar results when it came to controlling blood pressure, cholesterol, and diabetes. Principal investigator Paul T. Williams said, “Walking and running provide an ideal test of the health benefits of moderate-intensity walking and vigorous-intensity running because they involve the same muscle groups and the same activities performed at different intensities. The more the runners ran and the walkers walked, the better off they were in health benefits. If the amount of energy expended was the same between the two groups, then the health benefits were comparable.”

Williams added, “Walking may be a more sustainable activity for some people when compared to running, however, those who choose running end up exercising twice as much as those that choose walking. This is probably because they can do twice as much in an hour.”

The study offers an alternative way of exercising, which eliminates excuses that one can’t do it.

The risk of type 2 diabetes is lower in people partaking in brisk walks. The study found that brisk walking may actually be more effective in warding off type 2 diabetes than jogging. The study involved 150 people with prediabetes divided into four groups. One group followed a gold-standard program that included a low-fat, low-calorie diet and moderate-intensity exercise equivalent to 7.5 miles of brisk walking a week.

In another study, moderate exercise has been shown to improve heart health in seniors over the age of 65. Moderate exercise is classified as riding a bike, going for a swim, or even heading out for a stroll.

For the study, the researchers tracked the health outcomes in nearly 2,500 Finish people over the age of 65 for 12 years. None of the participants had a serious chronic illness at the start of the study, and at least 1,600 partook in moderate exercise.

Those in the low-exercise category spent most of their time watching TV and performed minimal activity. Moderate exercise was defined as at least four hours of activity a week, and high exercise involved intense activities for at least three hours a week.

Bad cholesterol was also found to be lowered naturally through exercises like planks and daily workouts. The researchers at UCLA tested whether men who weight-trained would have healthier HDL than men who lived a sedentary lifestyle. The researchers found that men who did not exercise were more likely to have dysfunctional HDL, compared to the men who did exercise.

No need to panic if you’re not a fitness junkie or if you have been sedentary for a long time. You don’t need to train for a triathlon. Here are some examples of moderate-intensity aerobic exercises to try:

Brisk walking: Get out there and start pumping your arms while you walk.

Bicycling: Haven’t got on a bike in years? It’s easier than you think and will bring out your inner kid. Try a path in a park or conservation area and enjoy the scenery.

Jogging: The impact of light jogging is great for building strong bones, too. Start with walking for two minutes, then run for one minute. Continue alternating as you work up to a steady jogging pace.

Tennis: Andre Agassi won’t be watching, so ease into the game and join a tennis club or find a willing partner and have fun.

As you can see, exercise has numerous benefits when it comes to managing heart-related conditions. The best part is, you don’t need to partake in vigorous or strenuous activity. You can actually receive many of these health benefits by simply picking up the pace while walking.