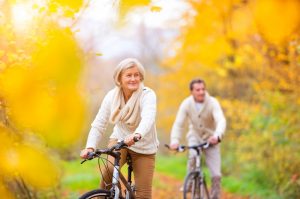 Moderate exercise has been shown to improve heart health in seniors over the age of 65. Moderate exercise is classified as riding a bike, going for a swim, or even heading out for a stroll.

For the study, the researchers tracked the health outcomes in nearly 2,500 Finish people over the age of 65 for 12 years. None of the participants had a serious chronic illness at the start of the study, and at least 1,600 partook in moderate exercise.
Those in the low exercise category spent most of their time watching TV and performed minimal activity. Moderate exercise was considered at least four hours of activity a week, and high exercise involved intense activities for at least three hours a week.

Dr. Joep Perk, a cardiologist who studies heart disease prevention at Linnaeus University, said, “The message to the general public is: start moving around after retirement, if you haven’t done so already.”

4 snacks that are good for your heart