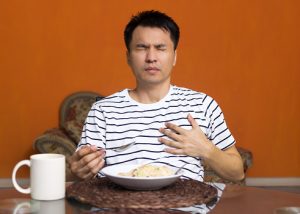 Heartburn is the burning sensation felt in the chest just beneath the sternum (breastbone). It is a discomfort that nearly seven million American experience as part of an associated condition called gastroesophageal reflux disease (GERD). Heartburn is sometimes referred to as indigestion, acid regurgitation, or sour stomach. Despite its name, heartburn is not related to problems with your heart. Instead, it is due to an abnormality keeping stomach acid out of the esophagus.

How long does a heartburn last?

Besides being uncomfortable, heartburn can also cause problems such as excessive burping, nausea, and bloating. Generally, heartburn symptoms can last anywhere from 2 to 3 hours depending on the circumstance. This is enough time, however, to experience associated symptoms like asthma, wheezing, choking, or even the inability to sleep. These additional symptoms may be a triggered response by the body in an attempt to alleviate symptoms. For example, symptoms when lying down prompt you to stand up.

Heart burn is caused by the reflux of stomach acid into the esophagus, which happens when the esophageal sphincter can’t close effectively. Having stomach acid splash onto cellular tissue not equipped to handle its corrosive nature causes damage and symptoms to occur. The following are the symptoms often associated with heartburn:

Is my heartburn a disease?

Heartburn can be experienced by virtually anyone. It could occur due to foods you eat or be a consequence of obesity. The duration at which you experience these symptoms pushes the diagnosis of acid reflux into disease territory. Occasional acid reflux symptoms are easily remedied with lifestyle changes. However, more serious cases of acid reflux that occur over long periods of time aren’t as easy to take care of.

When acid reflux goes beyond a general feeling of discomfort and is present after nearly every meal, more drastic measures need to be taken. This often means the use of over-the-counter or prescribed medication to decrease the production of stomach acid.

Heartburn can be managed by simply changing a few lifestyle habits or avoiding certain triggers. The following are some tips to help you relieve your heartburn symptoms:

Eat smaller portions throughout the day

The more you eat, the more stomach you will need to help digest it. This is especially true for those who eat large meals in a single sitting. Having more food in the stomach also creates a high amount of pressure, leading to an increased chance of stomach acid escaping through the esophageal sphincter.

There exist foods that can increase the amount of acidity in the stomach, referred to as trigger foods. Trigger foods produce heartburn and make symptoms worse. Some trigger foods include:

This can manifest in any form, be it from your work or due to problems at home. Stress can wreak havoc on the body, leading to the production of stress hormones that can manifest as increased acid reflux symptoms. The gut and the brain are connected by a complex network of nerves that control everything from muscle concentration to the amount of acid produced. Having an excessive amount of emotional stress has been linked to fluctuations in hormone levels

It may be due to your medication

Acid reflux could be a side-effect of the medication you currently take. Certain medication used to treat high blood pressure have been known to induce acid reflux symptoms. The birth control pill has also been implicated. While not a medication, smoking is a form of chemical exposure that is known for relaxing the lower esophageal sphincter, leading to acid reflux.

It is never a bad idea to get expert advice from a medical professional when there’s a problem with your body. Having heartburn for a longer period of time can actually lead to life threatening complications. If you experience the following symptoms alongside your heartburn, it’s recommended to see a doctor right away.

Related: Foods that won’t cause heartburn: What to eat and avoid