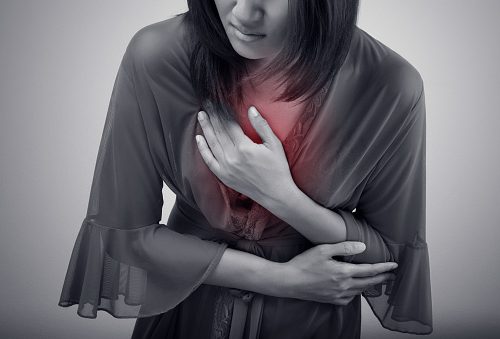 Experiencing a burning sensation in the chest and subsequent chest pain can be the result of many disorders. It often leads to discomfort, aching pain, and perhaps even a metallic taste left in the mouth. Fortunately, most of the causes of these symptoms are not severe and can easily be remedied. The first thing people often experience is a state of confusion—they don’t know why these unusual symptoms are occurring in the first place, with everything from simple heartburn to a severe heart attack running through their minds.

Chest burning or pain can be associated with more severe disorders such as coronary artery disease, angina, or even problems with the organs within the thoracic cavity, so it is always advised to speak to a medical professional about your symptoms as soon as possible to rule out any life-threatening causes.

People often confuse chest burning with a heart attack. While they may be similar, there are defining characteristics of each that help separate the two. The following is a summary of what you can expect to feel when having heartburn vs. having a heart attack.

Burning chest pain has a multitude of different causes, and a medical test needs to be done to determine its origin. However, of the many causes, most are not life threatening and can be identified by knowing the various signs and symptoms. The following are some of the most common reasons for one to experience a burning sensation in the chest:

The inflammation of the esophagus. The tissue of the tube-like structure that carries food from your mouth to your stomach. This disorder can cause chest pain and difficulty swallowing. It has a number of different causes, such stomach acid regurgitation, allergies, and certain oral medications. The following symptoms can be expected with esophagitis:

Treatment often depends on the amount of inflammation present. Over-the-counter medications and prescribed medications aid in the reduction of stomach acid, relieving the majority of symptoms. It is important to seek medical attention, however, as long standing cases can become malignant and require surgery.

Ulcers are open wounds that cause agonizing pain in whoever they affect. They can be present in any part of the digestive system and are the result of some drugs and bacterial infections—not by stress or spicy foods as previously thought. Symptoms primarily occur when stomach acid comes into contact with the ulcer and is experienced as pain with the following signs:

This occurs due to an area of weakness found on the diaphragm, specifically in an area where the esophagus passes through (hiatus). Occasionally, the stomach herniates up though this weakened opening. Relatively small Hiatal hernias cause no problems; however, larger ones can allow acid and food back into the esophagus, giving a burning sensation in the chest. Symptoms of a hiatal hernia include:

Treatment for minor symptoms may include the use of antacids, H-2 blockers, or proton pump inhibitors to reduce stomach acid. More severe cases will require surgery.

Other possible reasons for chest pain/burning are:

Complications of burning sensation in chest

Once diagnosed and treatment is underway, it is important to stick to the plan set out by your physician. If treatments or follow-ups are neglected or delayed, it may further increase the chances of complications occurring. Examples of such complications include:

There are some lifestyle changes and home remedies you can try today if acid reflux is the main cause of the burning sensation felt in your chest.

Maintain a healthy weight: Excess pounds put pressure on the abdomen, pushing up the stomach and causing acid to travel up the esophagus.

Avoid tight fitting clothes: May put pressure on your abdomen and lower the esophageal sphincter.

Do not lie down after meals: Wait at least three hours before lying down or going to bed after meals

Elevate the head of the bed: The use of gravity to keep stomach acid down

The best you can do when experiencing a burning chest sensation is to see a doctor. They have the means of doing more in-depth tests to rule out an acute myocardial infarction or heart attack. They can perform an EKG, blood tests, and a brief physical exam to help rule out this life-threatening possibility.

For the most part, however, burning chest pain is brought on by acid traveling up the esophagus, causing pain, with the most effective treatments augmenting the amount of stomach acid you produce. They may come in the form of proton pump inhibitors, H-2 blockers, or antacid medication, and they do a relatively good job. More serious cases of gastric acid regurgitation may require surgical correction, but this is not usually the case.

How to avoid chest pain while running