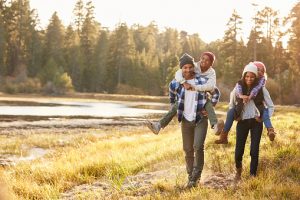 City life is often promoted as being luxurious and exciting, but perhaps we just aren’t built for this type of constant stimulation. Bright lights, constant noise, and the increased levels of pollution city dwellers breathe in on a daily basis could be causing us more harm than good.

The constant stressors that living in a big city puts on a person was the focus of a recent study carried out by researchers at the Max Planck Institute of Human Development. They found that city living puts citizens at higher risk for psychiatric illnesses such as depression, anxiety disorders, and schizophrenia when compared to living in the country.

It is estimated that about 70 percent of the world’s population will be living in cities by the year 2050. A correlation like this could mean an increase of serious mental health issues in the not too distant future.

Urban life may be putting undue stress on brain processes

This deduction was made by looking at a part of the brain called the amygdala, which plays an important role in stress processing and reactions to danger. While these are factors that have aided human evolution, overstimulation may lead to negative consequences.

The team of researchers decided to take a look at stress-related brain processes of people living in various environmental conditions, such as near a forest, urban greenery, or even by a wasteland.


“Research on brain plasticity supports the assumption that the environment can shape brain structure and function. That is why we are interested in the environmental conditions that may have positive effects on brain development. Studies of people in the countryside have already shown that living close to nature is good for their mental health and well-being. We, therefore, decided to examine city dwellers,” said first author Simone Kühn who led the study.

Study participants were taken from a larger study examining the physical, psychological, and social conditions for healthy aging named the Berlin Aging Study II (BASE-II). A total of 341 adults between the ages of 61 and 82. Each subject took part in memory and reasoning tests and had their brain structure analyzed using magnetic resonance imaging (MRI). The data collected was then combined with individual places of residence.

A relationship was found between the place of residence and brain health during the investigation. Those living in the city but close to a forest were more likely to show indications of a physiologically healthy amygdala, inferring that they were better at coping with stress. This relationship remained stable when differences in education and income were accounted for.

However, the researchers did not find any association between examined brain regions and urban green or wasteland areas. It was not possible to say that living near a forest had a positive effect on the amygdala either. But after looking at the available information, the researchers are confident that their correlation between forests and amygdala health hold true. The researchers do admit, however, that more research would be needed on the subject.

Related: Living near busy roads may be affecting your respiratory health

Wallpaper may be dangerous to your health