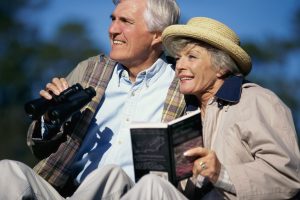 Academics from the University of Exeter, the British Trust for Ornithology, and the University of Queensland have found that those who live in areas with more birds and greenery have a reduced risk of suffering from mental ailments like depression, anxiety, and stress. The study found that there were mental health benefits linked to being able to see birds, shrubs, and trees near their homes. Those who spent more time outdoors also saw these benefits.

To conduct the study, researchers surveyed the mental health of more than 270 participants from a variety of age groups, income levels, and ethnicities, and compared their reported mental health to surveys of the number of birds found in their neighborhoods.

The team discovered that lower levels of stress, anxiety, and depression were linked to the number of birds that participants were able to see in the afternoon. Previous research conducted by the University of Exeter has shown that bird watching relaxes people and allows them to feel connected to nature, helping to lower stress and anxiety levels.

The study also found that the type of bird did not matter, as many are unable to identify multiple species correctly, meaning that the benefits were tied to the number of birds rather than which type they were. It was also found that individuals who spent less time bird watching one week than they had the previous week saw their levels of stress, anxiety and depression climb, meaning that time spent outdoors and in nature also had a positive impact on mental health.
The study was led by Dr. Daniel Cox, who commented, “This study starts to unpack the role that some key components of nature play for our mental well-being. Birds around the home, and nature in general, show great promise in preventative health care, making cities healthier, happier places to live.”

The benefits of nature on mental health were seen even after correcting for neighborhood variations, household income, age, and other sociodemographic factors.