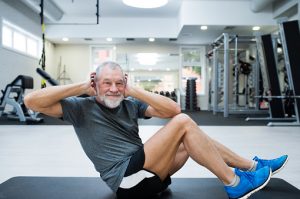 Dementia and cognitive decline are serious threats to older adults, but the threat is reduced for older adults who maintain strong muscles. The Finnish study looked at the association between upper and lower body muscle strength with cognitive function.

First author Heikki Pentikäinen explained, “The findings suggest that it may be justified to go beyond the handgrip and to include the upper and lower body when measuring muscle strength, as this may better reflect the association between muscle strength and cognition.”

It is known that exercise can offer a wide variety of health benefits, and until now, the area of exercise and cognitive function has been vastly under-studied. The latest findings now suggest that to protect your cognitive function, seniors should maintain muscle strength.

Mild cognitive impairment (MCI), as the name suggests, is a disorder that leads to cognitive decline. It is known to be one of the first symptoms of Alzheimer’s disease or dementia, but that isn’t always the case. It could be the result of some other underlying health issue, accident, stress, or deficiency.


Having said that, it is essential to rule out the possibilities of MCI progressing into Alzheimer’s or dementia and diagnose the exact cause. Some stats show that it is common for people above 65 years of age.

Fortunately, mild cognitive impairment can be controlled depending on the stage, cause, age, and other factors such as early detection. Research shows that exercise goes a long way in repairing and improving cognitive function. The American Academy of Neurology (AAN) recently updated its guidelines, which recommend doctors prescribe exercise to these patients. So, most neurologists may prescribe exercise rather than too much medication to inhibit the progression of MCI into Alzheimer’s, which does not have a cure as of yet.

Ronald Peterson, lead author and director of the Alzheimer’s Disease Research Center, Mayo Clinic, thinks that if exercise has benefits for the heart, the same may be applicable to the brain. Also, there are support groups of psychiatrists and clinical psychologists that conduct cognitive training, mental exercises, and activities for MCI patients. However, more evidence is required to prove if this actually helps manage the symptoms.

Related: How exercise can slow down dementia progression: Expert guidelines

How to recover from muscle atrophy with diet and exercises