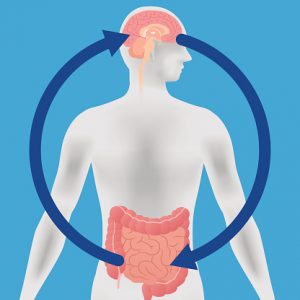 There is nothing worse than getting painful abdominal cramps and feeling like you have to rush to the bathroom to relieve yourself. This sense of urgency often makes us anxious, as we dread not finding a toilet and ruining our underwear. These are the most common symptoms of irritable bowel syndrome (IBS), a condition that affects nearly one in five Americans today.

It’s easy to think that this behavior is strictly isolated to the goings on with the gastrointestinal system. However, new research has found a link between IBS and regions of the brain, and they think previous childhood trauma may be the cause of symptom development.

Irritable bowel syndrome is a common disorder that affects the large colon. It differs from other inflammatory bowel conditions like ulcerative colitis and Crohn’s disease in a few ways. For one, it doesn’t change the bowel tissue or increase the risk of colorectal cancer.

To diagnose IBS, certain criteria have to be met, including abdominal pain or discomfort lasting at least three days to a month and improvement of the pain after defecating. IBS may also include an altered frequency or consistency of stool. IBS can also present as bouts of constipation in combination with diarrhea. We don’t know what causes IBS, but we know a few things that are involved. They are as follows:

The study in question involved 29 previously diagnosed participants. The researchers collected behavioral and clinical measures including stool samples and structural brain images. An additional group of 23 healthy adults was also included as control subjects. DNA sequencing and various mathematical approaches to quantify composition, abundance, and diversity of gut flora were used. The researchers also estimated the microbial gene content and gene products of the stool samples and cross-referenced all collected data with structural features of the brain.

What they discovered is that the composition of gut flora of those diagnosed with IBS fell into two subgroups. One was very like that of the healthy control group, and the other had altered gut flora and a history of early life trauma with a longer duration of IBS symptoms. These two groups also had differences in brain structure.

The researchers speculate that the changes observed in the brains of childhood trauma patients can alter gut flora compositions, leading to lifelong changes. They say that gut flora changes may feed back into sensory brain regions, altering the sensitivity to gut stimuli, with personalized therapies for IBS patients based on gut microbial profiles being a future possibility.