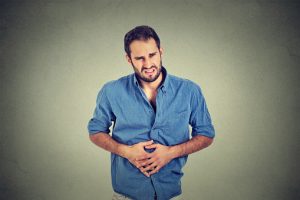 A study published in the journal Translational Medicine and conducted by researchers at McMaster University and their colleagues has found a direct link between gut-brain communication and irritable bowel syndrome (IBS).

Irritable bowel syndrome (IBS) is a common disorder that affects the colon (large intestine). It often results in abdominal pain, bloating, gas, diarrhea, and constipation. It is generally considered a chronic condition that needs to be managed long term.

The study observed how germ-free mice receive fecal microbiota (bacteria) from patients with IBS and how they mimicked IBS symptoms like anxiety.

For the study, Premysl Bercik and colleagues from the university collected stool samples from patients with a history of IBS and diarrhea for at least two years, and from five individuals for control, in order to test the guts of germ-free mice.

After three weeks, they assessed the gut microbiota of the rodents and compared the bacterial profiles to those that obtained from the fecal samples of the people. The results showed startling differences between the bacteria that appeared in the germ-free mice weeks after they received bacteria from patients that were diagnosed with IBS. In the second phase of the experiment, the researchers tried to check if anxiety-like behaviors linked to IBS were transferred along with the gut microbes.
It was found that mice with IBS bacteria that didn’t have anxiety symptoms developed anxiety. Mice with gut bacteria from patients with IBS and the same anxiety-like symptoms still showed anxiety after the fact.

Professor Sarkis Mazmanian from Caltech remarked that this was an interesting discovery, as it demonstrates how the bacteria associated with irritable bowel syndrome can actually induce gastrointestinal issues and anxiety associated with the syndrome.
Unfortunately, this study was not able to exactly identify the bacteria that was involved. They could not precisely determine if bacteria can directly affect the behavior of IBS in humans.