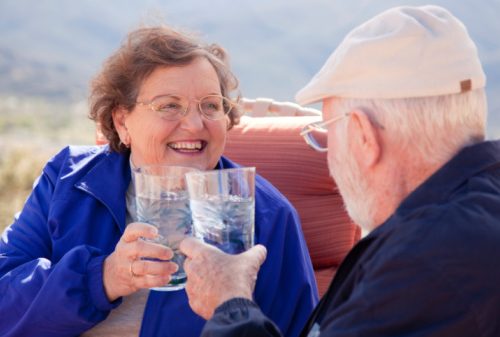 You know by now that drinking water is an integral part of good health. Sure, water keeps us hydrated, it keeps us alert, it helps removes toxins, and it helps promote the good health of all bodily functions. But did you know that it can also work to help protect you against memory loss? A new study has confirmed these findings and supports the notion that drinking water can help protect against Alzheimer’s disease and other forms of dementia.

The study uncovered that the lithium found in drinking water may offer protective effects against memory loss, but experts are hesitant about adding it to water or even promoting the use of lithium supplements.

The study found that the highest concentrations of lithium in drinking water significantly reduced the risk of Alzheimer’s disease, while moderate concentrations were found to increase the risk.

Lithium’s benefits for the brain are already well-known as it is currently used to treat brain conditions like bipolar disease.

Lithium naturally occurs in water and concentration levels vary greatly around the world.

The study took water samples from 151 waterworks plants that supply water to 42 percent of the Danish population. The study measured lithium levels among 73,731 dementia patients aged 50 to 90 and 733,653 healthy individuals.

On the other hand, concentration levels from 5.1 to 10 micrograms per liter were found to increase the risk of dementia by 22 percent.

Research lead Dr. Lars Vedel Kessing explained, “Long-term increased lithium exposure in drinking water may be associated with a lower incidence of dementia in a non-linear way. However, confounding from other factors associated with municipality of residence cannot be excluded.”


British Professor David Smith, a pharmacologist at Oxford University, said, “The association between the levels of lithium in drinking water and a diagnosis of dementia was significant. However, it was not a linear relationship: the relative risk of dementia increased by 22 per cent when the lithium level increased slightly and then decreased by 17 per cent when the level became much higher. Thus, the study does not have any public health implications. We should not be adding lithium salts to our tap water because we would not know what amount to use.”

In some people, high levels or low doses can be toxic and so it is difficult to regulate the exact amount of lithium that would be required to protect them.

Although the research holds promise, additional research is still required to determine how varying levels of lithium affect brain health.

In the meantime, it’s still a very good idea to continue to drink water since it is an integral part of overall health. Additionally, practicing healthy lifestyle habits may slow down the progression or onset of Alzheimer’s disease and other forms of dementia. Therefore, eat well, exercise, and, above all, get the proper amount of sleep as many studies point to poor sleep as a contributing factor to dementia.