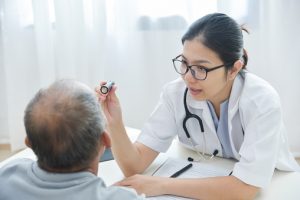 Role of the Brain in Glaucoma

A 2010 study found that the initial sign of glaucoma injury occurred in the brain. Therefore, glaucoma was a disease that bore similarity with other diseases that were related to age and the central nervous system. Like other diseases of the central nervous system, the degeneration in glaucoma is progressive. Once the nerve cells that transmit signals (the axons) degenerate, the retina is affected, as is the brain.

A more recent study published in the Proceedings of the National Academy of Sciences (PNAS) explored the link between the brain and glaucoma further and claims that “the brain fights back.” The research was carried out by a team led by David Calkins, vice chair of the Vanderbilt Eye Institute.

With the aim to identify new treatments for neurodegenerative diseases, the researchers attempted to understand the response of neurons to stress and whether this response could be adapted to delay their progression. To explore this possibility, researchers investigated experimental glaucoma. They modeled the human condition in mice to study it.

The researchers observed the relationship between the loss of synapses and the signals of the axons. In the process, they discovered the mechanism by which the brain actually preserves vision in spite of the stress of glaucoma.


They found that an increase in ocular pressure actually led to a rise in ganglion cell excitability. Ganglions are nerve cells that are present on the inner surface of the retina. Researchers observed that their functioning, especially in response to light, improved when there was an increase in eye pressure. This indicates that they can adapt to maintain signals to the brain and preserve vision.

Nerve cells have extensions called dendrites that connect with other cells to receive and transmit signals. They are usually damaged and destroyed due to glaucoma. Dr. Calkins explained that sodium channels which are usually far from neurons move closer to them once the dendrites are obliterated. These channels then enhance the signal of the axon to the brain for a short period of time, thereby preserving vision.

According to Calkin, this adaptation is “a balance between disease and adaptation” in which the neurons fight to maintain signals between regions of the brain and in the process, slow down the progression of glaucoma.

Significance of the Study

Previously, doctors believed that a loss of retinal activity shows that there is no connectivity between the retina and the brain. This study, however, proves this wrong and demonstrates how neurodegenerative diseases are not a “one-way path.” This provides researchers with new inspiration to find a way to fight other neurodegenerative disorders such as Alzheimer’s and Parkinson’s diseases.

The most significant findings are in connection with glaucoma, which is one of the leading causes of irreversible blindness today. The new study will guide researchers to develop treatments that will help the optic nerve continue signaling even as glaucoma progresses, so that vision can be maintained.