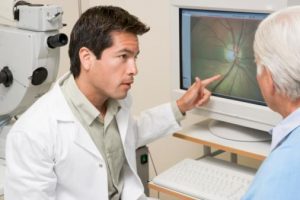 Glaucoma is a serious eye disease and one of the leading causes of blindness. It damages the eye’s optic nerve when the fluid pressure inside the eyes slowly rises. It’s all too common. According to the Glaucoma Research Foundation, estimates suggest more than three million Americans have glaucoma, but only half of them know they have it.

Glaucoma is an eye disease that gradually steals sight without warning. Which makes a regular comprehensive eye exam so important.

Other high-risk groups include people over 60, family members of people with glaucoma, diabetics, and people who are severely nearsighted.

Glaucoma can be detected four years earlier with a new eye test, according to a recent study. Australian scientists have developed a testing protocol that detects glaucoma four years earlier. The method involves having the patient look at small dots of light. If the patient is unable to detect the spots of light, it is an early indication of peripheral vision loss.

The study was conducted on 13 participants.

Director of the UNSW Centre for Eye Health Professor Michael Kalloniatis said, “Glaucoma is one of the leading causes of irreversible blindness in the world, and in the early stages patients usually have no symptoms and are not aware they are developing permanent vision loss. The cause of the disease is unknown and there is no cure, but its progression can be slowed with eye drops or surgery to lower pressure in the eye. So, early detection and early treatment is vital for prolonging sight.”

Current tests to diagnose glaucoma include an eye pressure test, observation of the optical nerve, microscopic examination of the anterior eye, and visual testing.

Understanding glaucoma and its signs and symptoms is part of public awareness that needs to happen. A survey done for the Glaucoma Research Foundation found that:

What causes glaucoma and puts everyone at risk? Let’s turn to the inner workings of the eye. The back of the eye is continuously producing a clear fluid known as aqueous humor. This fluid fills the front part of the eye and then exits through channels in the cornea and iris. But if these channels are obstructed in any way, the natural eye pressure (called intraocular pressure or IOP) in your eye may increase.

That means trouble: The optic nerve may become damaged and you may start losing sight in your eye.

People with diabetes and those with high blood pressure and heart disease have an increased risk of developing glaucoma. Chronic eye inflammation and thin corneas can lead to increased pressure in your eyes. Physical injury or trauma to the eye, such as being hit in the eye, can also cause eye pressure to increase.

There are different types of glaucoma you need to be aware of. As we’ve mentioned, chronic open-angle glaucoma and acute-angle closure glaucoma are the two most often diagnosed. The Glaucoma Research Foundation lists these two, along with two other types you may come across.

Open-angle glaucoma, the most common form of glaucoma, accounts for at least 90 percent of all glaucoma cases. This chronic disease has no signs or symptoms except gradual vision loss, often so slow that your vision will have incurred irreparable damage before any other signs become apparent.

“Open-angle” indicates that the angle where the iris meets the cornea is as wide and open as it should be.

Acute-angle closure glaucoma is the result of the angle between the iris and cornea closing.

Symptoms are acute and immediate medical attention is necessary.

Other variations of open-angle and acute-angle closure glaucoma include:

The other two types to note are as follows:

Congenital glaucoma happens in babies when there is incorrect or incomplete development of the eye’s drainage canals during the prenatal period. This is a rare condition that may be inherited. Surgery can often correct the structural defects while other cases are treated with medication and surgery.


Signs and symptoms of glaucoma

When it comes to the signs and symptoms of glaucoma, it’s a tricky disease to track. The most common type of glaucoma, primary open-angle glaucoma has virtually no signs or symptoms – except gradual vision loss. The problem is, if left untreated, glaucoma can lead to blindness and any vision loss can’t be restored.

There is no cure. Treatment usually includes a lifetime of prescription eye drops, and surgery in some cases. The point to remember is, early diagnosis and treatment can control glaucoma before vision loss or blindness occurs. Annual eye exams are a must to monitor any changes in your vision and detect early glaucoma.

New research is looking at lowering pressure inside the eye, and developing medications to protect and preserve the optic nerve from the damage that causes vision loss. There also has been progress in identifying the genetics of glaucoma in the last few years, including the discovery of genes found to be associated with many forms of glaucoma.

We’ve mentioned the lack of signs and symptoms of glaucoma in its most common form. But the less common kind, acute-angle closure glaucoma, is an emergency. It requires immediate treatment to reduce eye pressure as quickly as possible. If you experience any of the following, seek immediate medical attention:

Let’s spread the word and protect our vision with awareness of what causes glaucoma – and dilated eye exams, at least every two years.