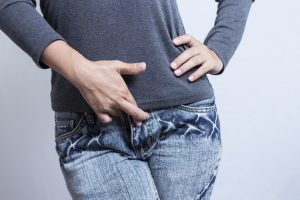 Causes and symptoms of functional incontinence

Functional incontinence can stem from a disorder or a mobility issue that prevents the individual from reaching the bathroom in time or even recognizing where the bathroom is.

Common causes for functional incontinence include dementia, poor eyesight, poor mobility, lack of motor skills that aid in removing clothing, unwillingness to go to the bathroom as a result of depression or anxiety, low lighting, obstacles on the way to the bathroom, neurological condition such as multiple sclerosis and Parkinson’s disease, or a side effect of medications.

What Are the Risk Factors for Functional Incontinence?

Other medical conditions a person has will affect how a person has functional incontinence. For example, a patient with arthritis may accidentally urinate themselves because they were unable to undress. A person with dementia, on the other hand, may have an accident as a result of forgetting or know knowing where the bathroom is.

How to Diagnose Functional Incontinence

Functional incontinence is diagnosed by looking at a patient’s medical history including current medical conditions along with any medications or supplements a person may be taking. Your doctor will also want to know about your general health including diet, exercise habits, hydration, and general mobility.

Your doctor may perform routine tests such as urinalysis to screen for any abnormalities.

In some cases, your doctor may request less common tests such as food and water intake, urinary and bowel movements, and discuss with you when incontinence became a problem. Your doctor will also want to check your pelvic floor strength and check for any abnormalities of the pelvis and urinary system such as the presence of any infections.

In some situations, pelvic floor exercises called Kegels can help strengthen the urinary sphincter and thus the pelvic muscles to help prevent the leaks. There is also a technique known as bladder training. Someone who bladder-trains is aiming to bring urge under control. One way to do this is to schedule certain times for washroom breaks and stick to those times. After a while, the bladder gets accustomed to emptying at specific times and the random, frequent urges start to subside. Some urologists also suggest double-voiding, which means going to the toilet, then waiting for a couple minutes and going again.

Discussing your functional incontinence with your doctor will help you get the proper treatment and better manage your condition.