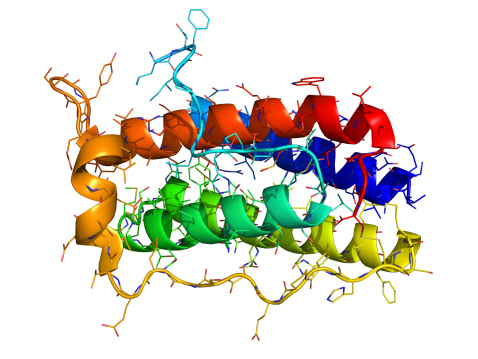 Fibromyalgia pain levels can be predicted by leptin, according to research. Fibromyalgia is a condition with many diverse symptoms, the most common being widespread pain. Associated differing biological variables include elevated sedimentation rate (ESR), cytokine profile, and hormone levels. Diagnosing fibromyalgia is a challenge as there are no known biomarkers a patient can be tested for. For the study, researchers used the Vectra®DA, a multi-biomarker disease activity score, to measure serum biomarkers in patients with fibromyalgia and elevated inflammatory markers.

This cross-sectional study involved 33 patients from Los Angeles County. Patients displayed high results on the Vectra®DA, with mean score of 46.5 (range 30 to 84, or moderate to high activity). The serum concentrations of 12 biomarkers – with the exception of leptin – were found to be similar to those with rheumatoid arthritis. Forty-five percent of fibromyalgia patients had higher leptin levels.

The researchers found that the protein leptin plays an important pro-inflammatory and immunomodulatory role in the disease development in a clinical subgroup of fibromyalgia patients with elevated leptin levels. A better understanding of the leptin participation in the pathogenic processes of fibromyalgia may help diagnose the condition and offer better treatments.

Leptin is known to help control appetite, but it may also be the driver of pain, according to research. Researchers measured levels of leptin in healthy women and fibromyalgic women and found that it may be used as a pain predictor, which can aid in future treatments.

Leptin has already been found to play a role in conditions like rheumatoid arthritis, lupus, and multiple sclerosis.

This small-scale study followed three fibromyalgic women for 25 days and analyzed leptin levels and pain on a daily basis.

The researchers found that leptin levels fluctuated along with the reported pain levels. On the days when women experienced greater pain, their leptin levels were found to be higher as well.

The second study looked at blood samples, body mass index levels, and bodily pain data from participants of the Women’s Health Initiative Observational Study. The group consisted of 5,676 postmenopausal women representative of the general population. Once again, the researchers found that higher leptin levels and body mass index were associated with greater pain.

Although the studies do not establish a cause-and-effect association between leptin and fibromyalgic pain, it is a subject worth further investigating to develop a better understanding of fibromyalgia.

Fibromyalgia and Lyme disease are two illnesses that can cause fatigue and pain, but there are vast differences when it comes to their causes, symptoms, and treatment. Although it may be easy to confuse the two, they are very much different, and these differences can help aid in appropriate treatments. Continue reading…