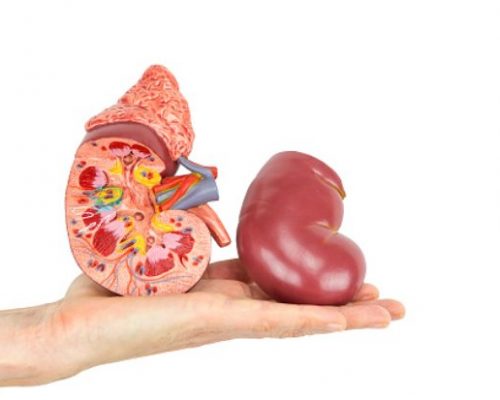 Enlarged kidneys are relatively uncommon, with only a few select disorders leading to the condition. The kidneys are responsible for filtering the blood from harmful metabolites and ensuring proper volume status that affects our blood pressure. Having an enlarged kidney will likely compromise all of its function.

What causes an enlarged kidney?

Hydronephrosis: This is the blockage of urine flow, leading to kidney distension. The condition can be caused by a kidney stone, blood clot, prostate enlargement, fecal impaction, injury, infection, radiation, or even a tumor. Pregnant women may also develop hydronephrosis, as an enlarged uterus can create pressure leading to a blockage of urinary output. Symptoms of this condition include excruciating, intermittent flank pain, with chronic forms of hydronephrosis possibly not exhibiting any symptoms at all. Treatment often involves relieving the source of the blockage.

Polycystic kidney disease: A disorder that is characterized by clusters of fluid-filled sacs called cysts within the kidney. Cysts may also be found elsewhere in the body. Complications of polycystic kidney disease include high blood pressure, pain, urinary tract infections, liver cysts, and kidney failure due to progressive function loss. Treatment of this disorder often involves managing the complications.

Pyelonephritis: An infection of the kidneys that originally stems from a bladder infection or from an infection originating in the blood. Diabetics, pregnant women, and immunocompromised individuals are considered high risk. Signs and symptoms may include enlarged kidneys, tenderness on one or both sides of the lower back, chills, fever, painful and frequent urination, foul-smelling urine, cloudy urine, and spasms causing intense pain. Treatment involves the use of antibiotics to eradicate the infection

Pain: In the context of having an enlarged kidney, pain can present in the form of burning or pain during urination. It can signify a urinary tract infection, which can be a precursor of an enlarged kidney. Pain is usually localized near the pelvis, over the bladder, or near the lower part of the abdomen. Women will generally feel pain near the opening of the vagina, while men will feel pain at the end of the urethra. Pain may also travel or radiate to the lower back. As the outer covering of the kidney swells, it can lead affected patient to feel nausea and vomiting. Kidney enlargement due to kidney stones can cause severe pain that may last from 20 to 30 minutes.

Swelling: Generally found in the legs of the affected patient and is caused by fluids not being able to pass properly through the diseased kidney. Instead, fluid accumulates and pools in the extremities, like in the legs, making them look puffy or swollen. Swelling may also be seen in the ankles, abdomen, lower back, and face. Swelling found in the legs may also be a sign of heart failure.

Changes in urination: Considering that your kidneys are directly involved in urine production, unusual changes in urination patterns may signal an enlarged kidney. Increased frequency of urination may be a consequence of drinking a lot of fluids, caffeine, or alcohol, but having an enlarged kidney will present in a more unusual manner. A chronic metabolic disease like diabetes can lead to kidney damage and subsequent kidney enlargement. Finding blood in the urine is also an indication that there is a problem with the renal system.

Treatment of an enlarged kidney will often involve recognizing and treating the underlying condition.

In cases where kidney enlargement is due to a blockage, such as in hydronephrosis, getting rid of whatever is blocking the flow of urine is usually the primary focus. Depending on the cause of obstruction, your doctor will choose the best option for your particular condition. This may involve the insertion of a ureteral stent, a tube that allows the ureter to drain into the bladder, or the insertion of a nephrostomy tube, which allows blocked urine to drain through the back.

An infection leading to cases of pyelonephritis kidney infection is often treated with bacteria specific antibiotics. Depending on the severity of the condition, treatment may either be given orally or through IV. Commonly used antibiotics include trimethoprim with sulfamethoxazole (Bactrim), ciprofloxacin (Cipro), or levofloxacin (Levaquin), but the choice of antibiotic will depend on your history of allergies and laboratory testing of the bacteria causing the infection. Treatment courses typically last for 10 to 14 days.

Causes of atrophic kidney and how to treat it