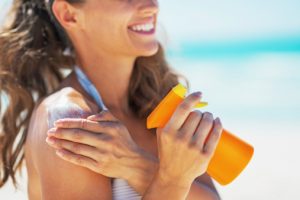 Endometriosis risk may be higher with benzophenone-type ingredients in sunscreen. Benzophenone (BP) can mimic the effects of estrogen, which can increase the risk of endometriosis – a condition in which the uterine tissue grows outside of the uterus, causing severe pain and reproductive issues.

Sunscreen and other products that contain benzophenone-type ingredients are effective at blocking harmful ultraviolet rays from the sun. Small amounts of BP can permeate through the skin and get absorbed into the blood where it mimics estrogen. Estrogen is the key player in endometriosis.

In an alternative study, researchers found that chemicals in sunscreen can damage hormones which can contribute to endometriosis and low sperm count. Protecting ourselves from the sun is important as a preventative measure against skin cancer and other health complications, but many available products can put us at risk for other problems.

Sunscreen temporarily offers us protection against ultraviolet rays and usually has to be reapplied in order for that protection to last. One harmful chemical found in sunscreen is oxybenzone, which has been found to be liked to a higher risk of endometriosis in females and low sperm count in males. A review of sunscreens found that nearly half of those available to purchase contain oxybenzone.

Like benzophenone, when oxybenzone permeates the skin, it also acts like estrogen in the bloodstream. Excess estrogen in both males and females can lead to complications. In lab settings, researchers have found that oxybenzone has a one to nine percent skin penetration rate and is commonly detected in blood and even breast milk in many Americans.

Another ingredient, octinoxate, can have hormone-like behavior and can alter the function of the reproductive system, as has been seen in animal studies.

Before the summer comes around, when you shop for a sunscreen, read the ingredients carefully to ensure these harmful chemicals are not present.

Need protection from the sun this summer? Researchers are suggesting an algae sunscreen could be your best bet. And this all-natural version uses molecules found in fish slime. When we get sunburn, we reach for aloe – a naturally soothing gel from the aloe plant. But when we have to protect ourselves from the sun, we typically reach for a synthetic, man-made sunscreen. Continue reading…

Endometriosis lesions risk is influenced by sexuality and semen fluid, according to research. The findings come from researchers at the University of Adelaide where lead researcher Dr. Jonathon McGuane said, “In laboratory studies, our research found that seminal fluid (a major component of semen) enhances the survival and growth of endometriosis lesions.” Continue reading…