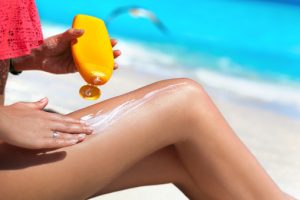 Need protection from the sun this summer? Researchers are suggesting an algae sunscreen could be your best bet. And this all-natural version uses molecules found in fish slime.

When we get sunburn we reach for aloe – a naturally soothing gel from the aloe plant. But when we have to protect ourselves from the sun, we typically reach for a synthetic, man-made sunscreen.

Recently, consumer reports have shed light on sunscreens and their supposed effectiveness. Critics and health officials warn that some sunscreens do not protect as advertised and could pose a risk to the environment.

The American Chemical Society has created a natural sunscreen using molecules from algae as a safer alternative to traditional sunscreens.

Sunscreen works by either absorbing ultraviolet (UV) light or absorbing it. Many rely on synthetic compounds to help block the sun’s rays. Researchers then looked to nature for a more reliable solution. They come up with algae sunscreen.

Algae’s sunscreen molecules are easily available in reef fish mucus and micro-organisms, making them sustainable. Researchers combined these molecules with chitosan, which is found in crustacean shells.

The team headed up by Vincent Bulone and Susana Fernandes found that the sunscreen not only absorbed both UV A and UV B efficiently, but held up well against heat. It’s unclear if an algae sunscreen will be hitting stores anytime soon, but the prospect of a natural sun-protector is high.

The development was published in the journal ACS Applied Materials and Interfaces.