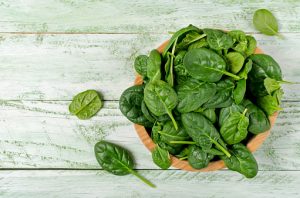 Cognitive decline is an unfortunate medical reality that can affect any one of us as we age. It is also one of the primary symptoms associated with degenerative conditions such as dementia. There are ways to combat this eventuality, however. We have all heard the phrase “use it or lose it” when it comes to brain health, but new research has shown that there may be something else we can do to protect our cognitive abilities as we age.

A new study from Rush University has found that the consumption of green leafy vegetables is linked to the slowing of cognitive decline in older people. The study was performed on 960 participants between the ages of 58 and 99. It tested the effects of six primary nutrients and bioactive ingredients that can be found in green leafy vegetables in relation to cognitive decline. These included vitamin K (phylloquinone), lutein, β-carotene, nitrate, folate, kaempferol, and α-tocopherol. The study took nearly five years to complete.

The Beginning of the Study

The results were astonishing. Martha Clare Morris, one of the authors of the study from Rush University, was quoted as saying “Green leafy vegetables are packed with brain healthy nutrients. In this study, as little as one daily serving of leafy greens was associated with significant slowing in cognitive abilities.”


Those participants who consumed one or more servings of the specified vegetables per day showed a slower rate of cognitive decline relative to 11 years of aging compared to those who rarely or never ate their leafy greens. These individuals were classified as those in the highest quintile of vegetable intake.

The researchers concluded that one serving of green leafy vegetables per day could slow the process of cognitive decline by an incredible rate. These results were also attributed to other foods rich in phylloquinone, lutein, nitrate, folate, α-tocopherol, and kaempferol. Adding a single serving of green veggies to your diet is a pretty simple way to help stave off the daunting reality of cognitive decline. It’s never too late to start eating your fruits and veggies.

Related: Cognitive decline after a stroke reduced with MIND diet

Walking over 4,000 steps a day found to improve cognitive ability in adults 60 and older