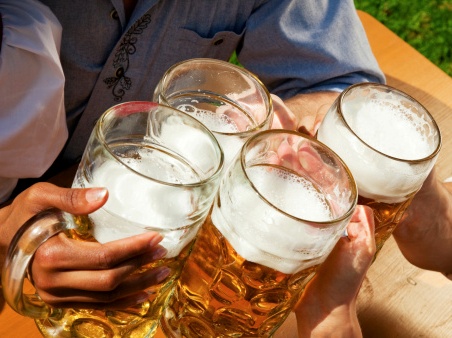 For thousands of years, beer has been considered the most common beverage around the world. Its extensive use in society may have been fueled by notion of its positive effects on health, although no scientific evidence has been collected during earlier times. Unfortunately, beer has also been often described as a beverage that imparts negative impact on the user, in which excessive drinkers end up drunk and accident-prone.

Risk of Obesity Aside – Beer Can Help?

Despite the association of beer with calories and a higher risk of obesity, beer has also been linked with longer life, mainly by decreasing the risk of developing different types of diseases. According to a recent medical report published in the journal Nutrients, moderate consumption of beer, which is generally one to two glasses each day, has been associated with a lower chance of developing heart disease, hypertension, cancer, and diabetes. In addition, drinking a couple of glasses of beer each day will also be unlikely to cause any problems with the amount of calories consumed on a daily basis and the risk of obesity. Diets that include beer may also appear as more delectable than those without.

According to the report, beer contains phenols that give its specific taste. In addition, different types of this organic molecule are present in various varieties of beer, depending on how and where it was manufactured. Phenolic acids have been extensively characterized in terms of the capacity to undergo antioxidative activities, which generally involve searching and removing highly reactive molecules in the cells and tissues of the body. These highly reactive molecules, also known as free radicals, have the capacity to integrate and cause molecular damage to the DNA and other molecules of cells. Continuous accumulation of molecular damages to essential molecules in the body may increase the risk of other health issues.

The medical report reviewed several scientific evidences on the effects of including moderate amounts of beer in the daily diets. For instance, one report that was reviewed by the investigators showed that the survival rate of moderate beer drinkers was higher than that of non-beer drinkers. There are also reports that describe the protective effects of beer in relation to aging, in which moderate beer drinkers showed less chances of developing dementia and other mental health disorders. The risk of obesity based on the excessive amount of calories that may be derived from diets consisting of a glass or two of beer each day was also lower. A lower chance of development of diabetes, which is an endocrine disorder related to high levels of sugar in the blood, has also been associated with moderate beer drinking in the daily diets. Drinking beer at small amounts may also be far from imparting problems of increasing the amount of calories introduced into the body and increasing the risk of obesity.

The medical report has also suggested that the alcohol present in beer may also be responsible for the protective effects that have been observed in the drinkers. When moderate amounts of beer are consumed or included in the daily diets, the amount of calories and the risk of obesity are controlled. In addition, moderate amounts of alcohol are also introduced to the body, which may possibly impart beneficial effects to health. For example, alcohol has been linked with increasing the production of high-density lipoproteins, which are usually called good cholesterol. Alcohol at small amounts in the daily diets has also been associated with a lower chance of platelet aggregation, which is scientifically considered as the early signs of blockages in the arteries and veins. The aggregation of platelets and other blood cells, as well as the deposition of fat along the walls of blood vessels are crucial in the development of cardiovascular diseases.