Home » General Health » Oral Care » Could You Have Diabetes? Ask Your Dentist 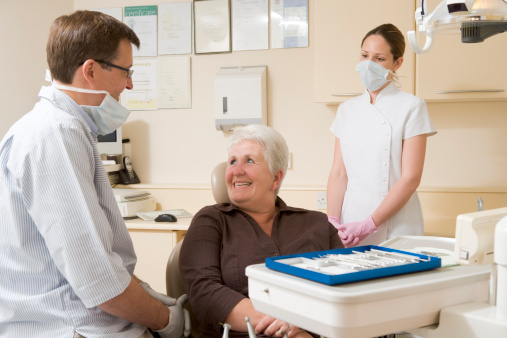 Doctors are beginning to pay more attention to the strong connection between a person’s oral health and their overall health. In some cases, the first signs of a developing disease can be found in the mouth. Certainly, we are beginning to see that this is the case with diabetes. With research pouring in, more dentists are starting to become aware of the oral hygiene signs that red flag a developing case of diabetes. This suggests that your visits to the dentist could not only help you preserve your pearly smile, but could also act as a life-saving screening tool to better tackle your attempts at diabetes prevention.

Diabetes develops when the body doesn’t make enough insulin or isn’t able to use insulin properly. As a result of the condition, glucose builds up in the blood instead of being absorbed by cells in the body, causing a loss of energy and a host of other health complications.

In the long run, diabetes or high blood glucose can damage nerves and blood vessels which lead to several life-threatening problems, such as heart disease, blindness, kidney disease, amputations, and dental disease. Diabetes can also make people more prone to other ailments.

Role of the Dentist

In some instances, people are not diagnosed with diabetes until multiple symptoms are present. Symptoms could include everything from blurred vision and weight loss, to bouts of fatigue and frequent, unexpected hunger pains. Research in recent years shows that an overwhelming number of Americans who suffer from a periodontal disease are also at risk of diabetes, presenting the perfect conditions for an early screening method.

In a study conducted through New York University, nutritional data from thousands of adults who were not previously diagnosed with diabetes were compiled and analyzed. Following medical guidelines, as well as guidelines from the American Diabetes Association, researchers discovered that 93 percent of people who had periodontal disease were considered at risk for diabetes.

This type of research leaves more people in the medical community wondering if the dentist is a good opportunity for an initial diabetes screening. One of the researchers involved in the NYU study suggests that dentists could use a “glucometer” to test blood samples taken from pockets of inflammation in the gums. The idea is that patients are accustomed to dentists looking and working in their mouths anyway, and may be less objectionable to the invasion.

An early diagnosis of diabetes is important, because it can delay or even prevent the onset of complications often associated with the disease. A quick diagnosis also means more comfort for the patient, resulting in a better quality of life.

Who Should be Tested for Diabetes?

According to the Centers for Disease Control and Prevention, an estimated 7 million Americans are likely suffering from diabetes and may not even know it. In some cases, symptoms are not noticeable to the sufferer. Statistics show that 70 percent of Americans see a dentist on a regular basis, thus according to the study, diabetic checks in the dental office would be a good way to catch undiagnosed cases.

The National Institutes of Health recommends testing of diabetes and prediabetes for anyone who over 45 years old and overweight. People who are younger than 45 and have one or more of the following risk factors should also consider being tested:

Medical researchers say it’s not difficult for dentists to screen for risk factors. They point out that a few questions and a blood sample is all that is required to stave off diabetes complications that could severely impact a person’s life down the road. According to the International Diabetes Foundation, data in 2011 shows diabetes caused 4.6 million deaths worldwide. The number of people being diagnosed with the disease continues to rise year by year. Just another reason to see the dentist!

Related Reading: Turning 50? You could be at risk for diabetes