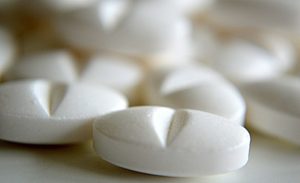 We often take for granted the ease in which we can pick up pain and fever medication at our local drug store. Non-steroidal anti-inflammatory medications have become so commonplace that in every instance of pain or discomfort, we simply pop a pill or two to gain relief.

What most people don’t realize is that long-term use of these types of drugs can have several negative side effects, from gastrointestinal bleeding to liver failure.

Now, a team of researchers from Denmark and France has found that long-term regular doses of a common pain reliever, known as ibuprofen, can lead to a disorder in men know as compensated hypogonadism, a condition that affects male fertility.

Compensated or subclinical hypogonadism is a condition where men have normal levels of testosterone in their body, but higher levels of luteinizing hormone (LH), a substance that stimulates the production of testosterone. However, a stable balance of sex hormones is required for adequate testosterone production.

Testing the effect of the drug on testosterone levels

The study involved 31 men between the ages of 18 and 35 who were requested to take 600mg (about three tablets) of ibuprofen every day for six weeks. Other volunteers were given a placebo, acting as a control group to compare the results. At the end of the study period, both groups were tested to assess the impact ibuprofen had on each participant.


The researchers concluded that in just two weeks, participants had increases in LH hormone. This result indicates that ibuprofen causes problems with certain cells in the testicles and subsequently prevents the production of testosterone and sperm cells.

This change in biological hormone production was also seen to affect the pituitary gland, a pea-sized structure located at the base of the brain that plays a vital role in the production of critical hormones that control various bodily functions. The pituitary gland compensated for decreases in testosterone by producing more of another hormone.

However, while compensated hypogonadism can cause a temporary reduction in the production of sperm cells and reduce fertility, the researchers say it is generally no cause for alarm. They do warn that when using drugs like ibuprofen for long periods of time, a condition called primary hypogonadism may present itself, but more research is needed.